For the fourth year running, University of Ilorin this year emerged the most preferred university of first choice by admission seekers in Nigeria.

Data from the Joint Admission and Matriculation Board (JAMB) shows that the school, which prides itself as “the university of first choice,” had 103,582 students (5.31 per cent of admission seekers) jostling for its admission in 2020.

Students of the school who spoke with PREMIUM TIMES attributed the continuous preference for the school to its stable academic calendar over the years.

Until March this year, for about two decades, UNILORIN academic staff never joined their colleagues in the Academic Staff of Nigerian Universities (ASUU) in an industrial action or embarked on one of their own unlike other Nigerian public universities.

“You know your graduation day the same day you gain admission,” Fadlullah Azeez, a 2020 chemistry graduate of the school told PREMIUM TIMES.

This is the same reason Zaynab Mojeed, who had chosen the university twice before eventually getting admission elsewhere, gave.

“I chose the school because of its fast academic calendar, and I was told they have good infrastructure,” she said.

Placed second, also for the fourth consecutive year, is Ahmadu Bello University, Zaria, which had 82,984 (4.26 per cent of all applicants) applications.

Students said this could be because, while the school joins other universities during nationwide strikes, it hardly ever embarked on internal strikes.

Closely following both UNILORIN and ABU are the University of Lagos (UNILAG) with 74,800 applications, and Bayero University (BUK), Kano, with 70,376 applications. 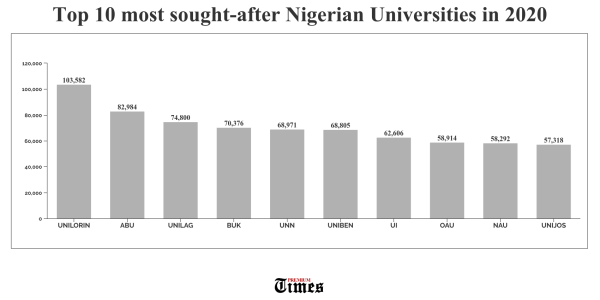