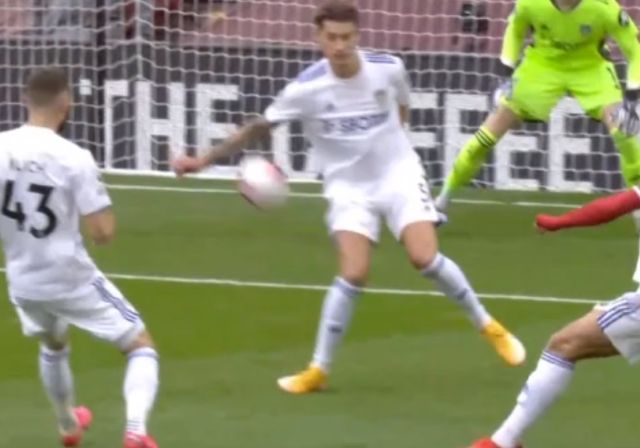 Many fans may have expected Leeds to start with some intense pressing and some positive play against Liverpool this evening, but the opening five minutes were completely dominated by Jurgen Klopp’s side.

Leeds haven’t been able to settle at all thanks to Liverpool pressing them high up the pitch, but the opening goal has come from the softest of penalty decisions.

A shot was deflected onto the hand of Robin Koch which all happened too quickly for it to be deliberate, but the ref was quick to point to the spot and VAR did nothing to overturn it.

Speaking during his commentary on Sky Sports, even Jamie Carragher was quick to admit his club were fortunate here as he said “I can’t believe that” in response to the penalty being given.

The award comes from the interpretation on new rules about hands and arms being in an unnatural position, so we have to hope there will be consistency about this round the league.

Mo Salah made no mistake from the spot as he fired it down the middle, and Liverpool’s title defence has started in the perfect way.