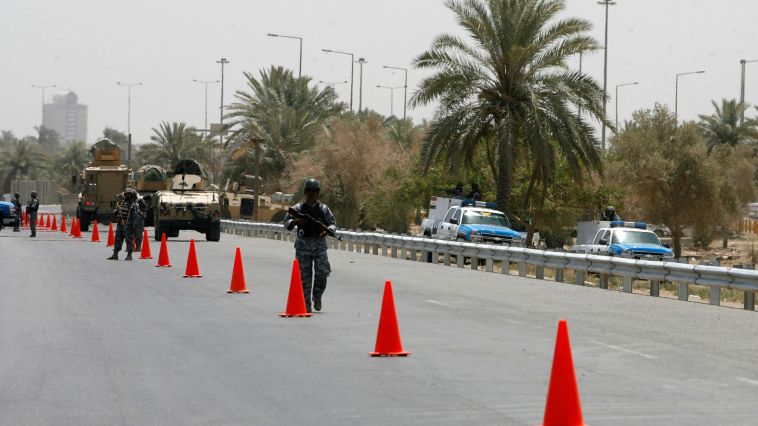 The British embassy said the blast targeted an embassy convoy on the airport road, close to the Umm al Tabool Mosque on Tuesday morning.

There were no injuries but an armoured vehicle was badly damaged.

A three-car convoy had just dropped off a diplomat at the US compound at the airport and was returning back to the British embassy when the explosion happened, Sky News understands.

No one has said they were behind the bombing.

The airport road was referred to during the 2000s as ‘Route Irish’ and back then was a well-known spot for attacks on vehicles.

British authorities do not know if they were the intended target on Tuesday and the blast has fuelled concerns over armed groups outside of the state’s control.

There has been a rise in attacks against the US but this is the first IED blast on a British diplomatic vehicle in Iraq since 2009.

“The safety and security of our staff is of paramount importance and we are in close touch with the Iraqi authorities,” said a statement from the British embassy.

The area of the attack, between the airport and the heavily fortified Green Zone, is often used by diplomatic missions, an Iraqi official said.

The attack is the first in months to target a diplomatic convoy and comes amid near daily rocket attacks aimed at the Green Zone and Iraqi army bases hosting US troops.

It follows a rocket attack on US and British buildings at 1am.

Two Katyusha rockets landed inside Baghdad’s heavily fortified Green Zone, which houses government buildings and foreign missions, but caused no casualties or damage, the military said in a statement.

Rocket attacks against US targets have increased over the past few weeks.

Iran has not directly…

Back to Top
Close
X
Now that I have your attention’: Chris Evans handles nude pic leak like a Pro…Daily MailThe American actor and Marvel's Captain America, Chris Evans, found himself in a scandal after accidentally sharing a compilation of pictures on his p…

X
Man placed in Coma after Police Officer stomped on his Head in viral Video…Daily MailA 32-year-old man is recovering from a coma after footage emerged appearing to show a police officer stomp on his head. Timothy Atkins was pinned to t…