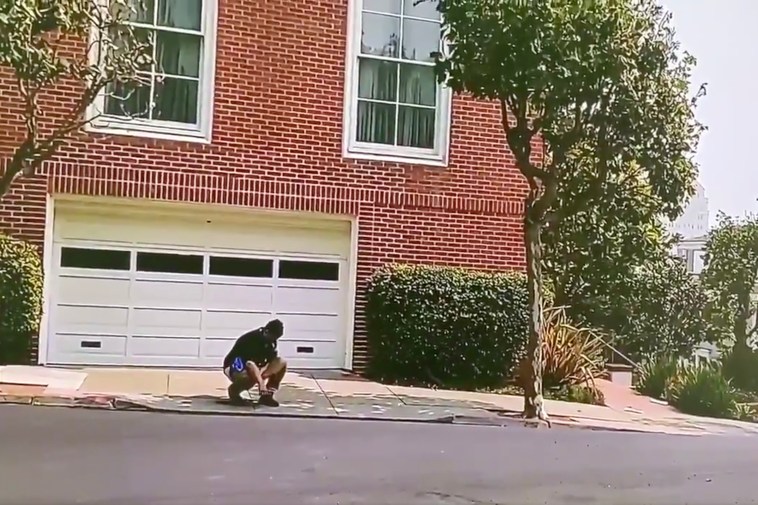 A Youtuber appeared to defecate in the driveway of House Speaker Nancy Pelosi’s home in a video livestreamed over the weekend.

In the footage taken on Saturday, the man, who identifies himself as Armando, walked through the streets of San Francisco in search of the Democrat’s home.

Once he found her home, he set up a camera across the road and walked over to her driveway.

Armando then saluted his viewers, pulled down his pants and proceeded to squat.

After a few seconds, Armando stands to his feet and wipes his buttocks before walking away and leaving behind what appeared to be feces.

‘That was for President Trump,’ Armando is heard telling his viewers. In the footage that was recorded on Saturday, the man identifies himself as Armando  (pictured) as he walks through a few San Francisco streets in search of the Democrat’s home

The video, which is titled ‘Poopalosi’, was shared on the YouTube star’s page and has more than 20,000 views as of Monday morning. A short time later, Armando shared another livestream titled, ‘I’m gonna need a lawyer.’

In that video, Armando claimed that he was detained by the Bay Area Rapid Transit Police at the request of the Capitol Police department.

‘It was scary, man,’ he said in the second video. ‘They asked me about Kamala Harris, and about how I joked on the stream that if she lived in San Francisco I’d sh*t on her house too. They weren’t f**king playing.’

‘@SpeakerPelosi I know you may not ever see this but I want you to know, I meant no foul harm yesterday when I did what I did. I’m not proud of it at all and I just would like for you to know that. I have no ill will against you or anyone in an elected officials position,’ the now deleted tweet read.

According to Armando’s YouTube page, he is an aspiring filmmaker who has backpacked across the US.

#NancyPelosi has man arrested for taking a poop on her #SanFrancisco driveway in a #PeacefulProtest via @nypost. #Poopalosihttps://t.co/uxJWtgXDVm

Man poops on Nancy Pelosi’s driveway: Says it was a ‘peaceful protest’