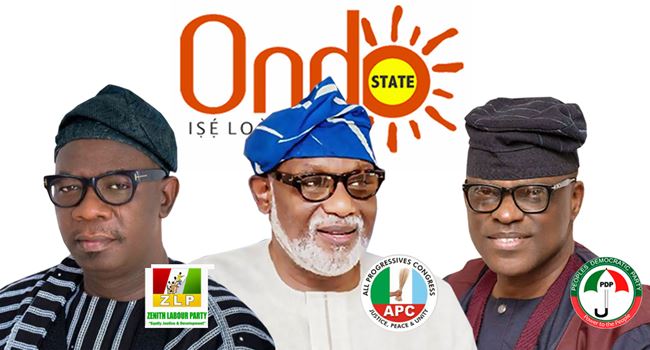 THE candidate of the All Progressives Congress in Ondo State, Rotimi Akeredolu has defeated both candidates of the Peoples Democratic Party and Zenith Labour Party, Eyitayo Jegede and Agboola Ajayi, respectively at a mock election organised by the Coalition 2020.

Coalition 2020 consist of over 26 political all parties, ethnic groups, trade unions, youths groups, women amongst others.

Meanwhile, a mild drama took place at the venue of the mock election when some members of political parties attempted to disrupt votes counting and attempted to destroy the ballot box.

The timely intervention of security operatives at the venue restored normalcy and the counting of the votes continued.

Akeredolu in the mock election in which over 400 delegates participated polled 162 votes while Agboola emerged the first runner up with 89 votes, Jegede polled 67 votes while the Prince Dapo Adelegan of the ADC had six votes.

The Chairman of the Coalition 2020 and former Senior Special Assistant on Political Matters to former Governor Olusegun Mimiko, Mr Akin Akinbobola, said any party that wins the mock election would win the October 10 governorship polls.

Akinbobola, therefore, announced the adoption of APC and Governor Akeredolu as the candidate and party the Coalition would support and vote for in the governorship election.

According to him “members of the Coalition 2020 changed their mind about their quest to stop Akeredolu’s second term bid after meeting and listening to him.

“The outcome is a reflection of the thinking of Ondo State people. There must be complaints but the majority of the people have spoken

“This Coalition has adopted the APC as our party that we will support. We will work to ensure APC candidate emerge winner of the October 10 governorship election.”

The state Chairman of the APC, Engr. Ade Adetimehin said it was the first time a Coalition of various groups and political parties…

Back to Top
Close
X
Police announces date, venue, requirements for 2020 selection exam…Breaking News 2The FCT Police Command has informed applicants for the Nigeria Police Academy’s 8th Regular Course of the venue and date for the selection examinati…