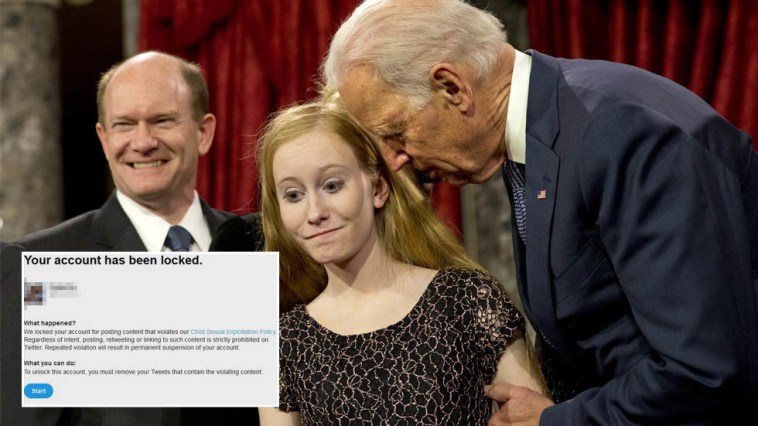 C-Span footage of Joe Biden interacting with girls is being flagged by Twitter for violating their Child Sexual Exploitation Policy after popping up online during an argument about the politician’s character.

The dispute on social media saw Texan progressive activist Johnny Graz seeking to make a case that the Democratic presidential nominee should be investigated for sexual assault.

Another commenter, who goes by the name ‘Jake Koenig,’ sought to support Graz’s argument by posting a video compilation of Biden touching various young girls during photo ops at their parents’ congressional swear-in ceremonies in 2015.

However, the commenter was unable to post the official public footage of the proceedings because “Twitter flagged [him] for trying to post images of child molestation.”

I tried to respond with a video of evidence on how Biden interacts with women and little girls but Twitter flagged me for trying to post images of child molestation hahahahahahhaha.

The infamous footage shows the former vice president touching US legislators’ daughters and granddaughters. At a various points, he appears to be holding some girls in place and closely leaning in to say something in their ears.

The discussion around Biden’s behavior has largely been fueled by a string of accusations by several women that he “inappropriately” touched them. Most notably, back in March, the former senator’s staffer Tara Reid publicly came forward saying he sexually assaulted her back in 1993.

The claims did not attract much media attention, even though they coincided with the rise of the highly publicized ‘MeToo’ movement, self-tasked with bringing powerful men to account for sexual misbehavior against women. The organization’s largest personalities did not seem to be interested in Reid’s case, which led to infighting and accusations of partisanship.

Biden himself denied the allegations, saying that “nothing like this ever, ever happened,” and even added that he doesn’t remember the woman.

X
Man poops on Nancy Pelosi’s driveway: Says it was a ‘peaceful protest’…United StatesYouTuber is detained after live streaming himself defecating on Nancy Pelosi's driveway A Youtuber appeared to defecate in the driveway of House Speak…