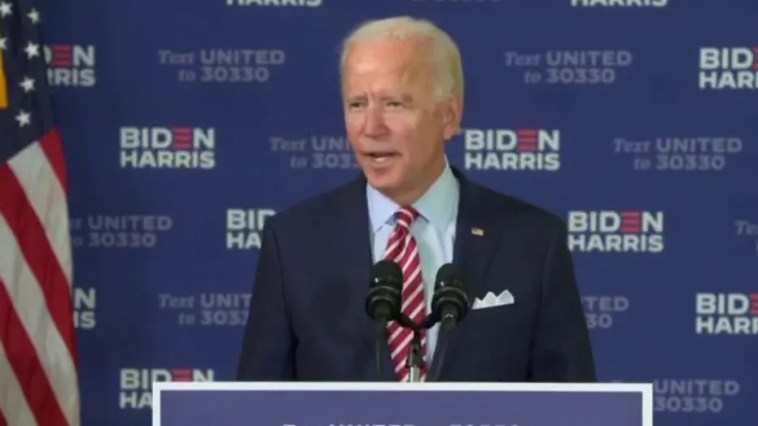 The California senator similarly touted plans under a ‘Harris administration’

Democratic presidential nominee Joe Biden really appears to be on the same page as his running mate Kamala Harris, mistakenly referring to plans in a “Harris-Biden administration” just one day after the California senator similarly suggested that she was on the top of the Democratic ticket.

While speaking at a campaign event in Tampa, Fla. on Tuesday, the former vice president attempted to make an appeal to veterans and offered a glimpse of what they should expect with him in the White House.

However, his remarks sounded like he would only be second in command.

“It makes it so much harder for military spouses to find good jobs and build their careers. That has to change,” Biden said. “A Harris-Biden administration is going to relaunch that effort and keep pushing further to make it easier for military spouses and veterans to find meaningful careers to ensure teachers know how to support military children in their classrooms and to improve support for caregivers and survivors so much more than we do now.”

Biden’s gaffe resembled remarks Harris made during a virtual roundtable on Monday with a group of Arizona small business owners.

“A Harris administration, together with Joe Biden as the president of the United States,” she said. She quickly clarified, “The Biden-Harris administration will provide access to $100 billion in low-interest loans and investments from minority business owners.”

"A Harris administration together with Joe Biden…"

During his remarks on Tuesday, Biden also raised eyebrows when he mistakenly confused Iran and Iraq when referring to fallen American soldiers.

President Trump and his supporters have repeatedly attacked Joe Biden as being a “Trojan Horse for the radical left” while other critics have predicted that the former vice president is serving as a “placeholder” until Harris is sworn in as president.
This post originally appeared in Fox News

Back to Top
Close
X
Biden campaign really worried about Joe Biden getting Covid…US Election 2020‘Keep back!’: How the Biden campaign obsesses over Covid The former vice president’s team goes to extraordinary lengths to keep him safe. By CH…