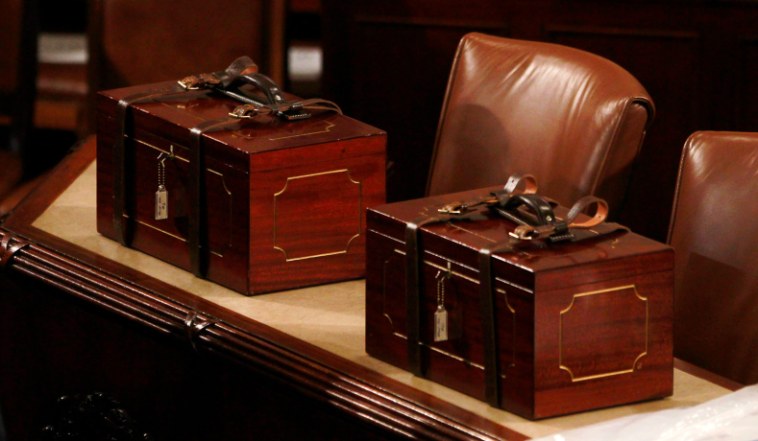 Probably not, but some Democrats are trying.

In the torrid final weeks of the long presidential campaign, the unique confluence of legal, procedural, and constitutional initiatives to alter the electoral process has been publicly glimpsed only occasionally. These are all activities undertaken by Democrats and Democratic state legislatures, presumably motivated by the uniform horror with which they endured Donald Trump’s election as president. Though his promise to “drain the swamp” was intended to apply to offenders of both parties steeped in the complacency and bad habits of the governing political class, the Democrats naturally consider that they were the principal target of Trump’s crusade. The substantial number of Republicans whom he was excoriating with the same rugged vocabulary as the Democrats were generally Never Trumpers who sped into informal alliance with the Democrats.

Most of the old Bush-McCain-Romney Republicans, including the late John McCain and Mitt Romney himself; former secretary of state, chairman of the joint chiefs, and national-security adviser General Colin Powell; the third-place contender for the 2016 Republican presidential nomination race, former Ohio governor John Kasich; and a large number of other prominent former Republican officeholders are in this camp. At one level they may be taken as a bipartisan consensus in favor of legitimate reform, as has periodically arisen and effected orderly modifications to the Constitution for two centuries. It is also possible to construe this spontaneous enthusiasm for changes to the electoral system as a self-serving effort by the locked-arms bipartisan Washington political class to raise the drawbridge, pull down the blinds, and repel boarders, especially those who come snorting into Washington pawing the ground in anger at the evils of their long incumbency.

The easiest and most plausible focal point for their activity is that permanent butt of discontent, the Electoral College. All but the smallest states send a number of pledged electors to choose the president that is equivalent to their share of the country’s population. The number of electors from each state is identical to the delegation it sends to both houses of Congress, and as each state has two senators, that does give the smaller states a slight leg up, but is not relevant to the comparative weighting of the larger states, especially the approximately 25 states that have from nearly ten electoral votes to the largest delegations, California (53) and Texas (38), of the total of 538. Complaints against the system normally arise after the winning candidate has received a smaller popular vote than the nominee of the other main party. This occurred in the 2016 election, when Hillary Clinton led Donald Trump by 2.9 million votes but lost in the Electoral College, 304–227. She won large pluralities in California, New York, and Illinois but lost Pennsylvania, Michigan, and Wisconsin by total of only 80,000 votes. (It has been little noted that even if 40,000 of those votes had been cast for her and she had won those states by a hair, if just 16,000 Clinton votes in New Hampshire and Nevada had gone to Trump, he would have won anyway, albeit by just two electoral votes — this sword cuts both ways.)

The Democrats assume that they are the habitual victims of these claimed shortcomings in the electoral system because the last previous occasion on which the winner lost the popular vote was also won by a Republican, George W. Bush, in 2000 against Al Gore. Gore won by 545,000 votes but was deemed by the United States Supreme Court to have lost the state of Florida by 497 votes out of 5.96 million cast, with a great many disputed ballots, and thus lost in the Electoral College by only four votes (which turned out officially to be five, as there was one abstention). In fact, when the votes cast in Alabama in 1960 for Dixiecrat candidate Harry Flood Byrd are attributed to him and not to the Democratic nominee, John F. Kennedy, Richard Nixon, who apparently lost the popular vote by 113,000 votes, would have won by about 40,000 but still would have lost in the Electoral College to Kennedy. In the 19th century, Andrew Jackson led in the popular vote and the Electoral College in 1824 in a four-candidate battle that did not produce an Electoral College majority, and John Quincy Adams was controversially elected in the House of Representatives. In 1876 Democratic New York governor Samuel Tilden defeated Republican governor of Ohio Rutherford B. Hayes, but three states submitted disputed tallies, and Hayes was elected in a straight partisan vote by an ad hoc commission appointed by Congress. In 1888, Benjamin Harrison defeated President Grover Cleveland although Cleveland received about 90,000 more votes. (Jackson and Cleveland won the succeeding elections against Adams and Harrison, and Hayes, as he had promised, retired after one term.) If the United States had the French system, which requires a runoff election between the top two candidates when no majority is achieved on the first ballot, in 2016 Trump would surely have taken almost all the 5.42 million Libertarian, Independent (Utah), and Constitution votes and won the popular vote over Clinton, even though she would have received most of the 1.53 million Green and Socialist Parties’ votes.

Although it is not clear that an alteration of the system would change the balance between the parties, it would certainly reduce the importance of the smaller states in electoral terms, which makes any amendment of the Constitution on the subject impossible. Fifteen states and the District of Columbia have adopted the National Popular Vote Interstate Compact, in which they pledge to direct all of their electoral votes to the candidate who leads in the national popular vote, but this takes effect only when states representing a majority in the Electoral College have adopted it, and at that point it would be subject to judicial challenge. But on July 6, 2020, the U.S. Supreme Court unanimously ruled that states have the power to direct how their Electoral College votes will be cast. This clearly implies that state legislatures can overrule the federal presidential voters of their states, which, though it can be justified technically by the broad wording of the Constitution, invites constitutional challenge. It would be by any democratic criterion a retrograde step for the American popular electorate of approximately 250 million people to be deemed to have surrendered the right to choose the president and vice president to the legislatures of the states where they reside (and in Washington, the District of Columbia Council).

This looming controversy, added to the comprehensive Democratic attempt to prevent the verification that those on the voters’ list are in fact citizens, and the Democrats’ drive to conduct as much of the election as possible on the basis of unsolicited mailings of ballots to the entire voters’ list, which is at all times partially obsolescent because of large numbers of people moving, dying, or coming of age every week, does constitute a broad effort to alter the nature of the system of presidential elections. If any or all of these initiatives succeed, the Republicans would adjust to it, there would be a backlash among some, and the spirit of democracy that has animated the United States from its earliest days would not be quenched. Indeed, that is probably not really the Democrats’ intention, though their motives are open to question. But these and other steps, including the elevation of the District of Columbia to statehood, ensuring another two Democratic senators (Clinton won 90.5 percent of the D.C. vote in 2016), add another contentious dimension to the already fierce electoral contest that should conclude on November 3 but may be continued into the courts. As there are only two serious candidates, it will not go to the House of Representatives (and the vice presidency to the Senate), but it might require determination by the Supreme Court, as occurred in 2000. Testing the Constitution will further envenom the atmosphere. Whatever happens, the system will produce a legally authentic result, but it is already one of the most tumultuous and momentous elections in the country’s history.