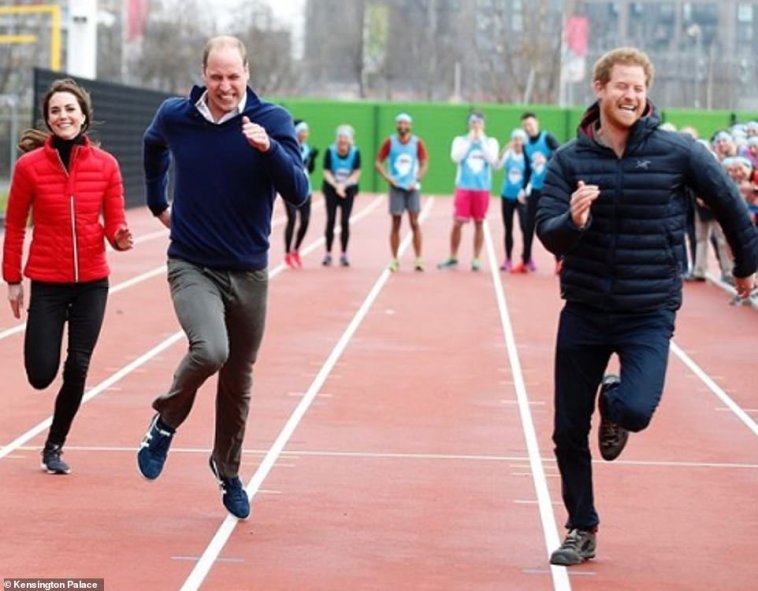 Royal fans were outraged after the Duchess of Sussex was left out of photos shared on social media to mark Prince Harry’s 36th birthday today.

The Duke and Duchess of Cambridge, the Queen and Prince Charles and the Duchess of Cornwall posted a total of four photographs of the Duke of Sussex to mark the occasion but his wife Meghan Markle, 39, did not appear in any.

The omission riled royal fans who took to the comments section to say it was ‘shady’ of family members to ‘literally cut Meghan out of the picture’.

In response to William and Kate’s photo, which shows the Cambridges and Prince Harry in a 2017 running race, one fan noted: ‘There must have been hundreds of photos you could have picked, but you chose to post one of Harry, William and Kate. I’m sure not including Meghan wasn’t unintentional.’

It comes after the strain in relations between Prince William, 38, and Harry, who were once inseparable, were laid bare in the Duke and Duchess of Sussexes’ biography Finding Freedom. Co-author Omid Scobie later claimed the brothers went two months without speaking following the Sussexes’ bombshell Megxit announcement.

More recently the Queen was said to have been caught off guard by Prince Harry and Meghan Markle’s $150million deal with US media giant Netflix.

Prince William and Kate Middleton appeared eager to lay to rest any reports of a family rift and shared an Instagram post dedicated to Harry early this morning.

The couple chose a light-hearted snap of Harry beating them both in a running race at London’s Olympic Stadium, accompanied by the caption: ‘Wishing a very happy birthday to Prince Harry today!’

The Queen, 94, shared her own well-wishes to her grandson via social media, posting a simple message alongside a photo of him beaming at her at a Buckingham Palace reception in 2017. Proud father Prince Charles, 71, opted for a snap of him laughing with his son at the Invictus Games in 2014 and a second portrait of Harry.

However royal fans noted in the comments section that all three family accounts chose to use photos of Prince Harry but not wife Meghan, 39. On Prince Harry’s 36th birthday, some fans are not happy that Prince William and Kate Middleton’s birthday tribute does not include Meghan Markle. The brothers have reportedly drifted apart.

Happy Birthday, Prince Harry! However, for some fans, it’s not so happy.

Tuesday, Sept. 15 marked a special day in England and across the pond in Harry’s new California home as the Duke of Sussex turned 36 years old. Archie Harrison‘s famous dad was showered with love and well wishes online in honor of his birthday, including from his relatives, brother Prince William and sister-in-law Kate Middleton. The Duke and Duchess of Cambridge’s Twitter account read, “Wishing a very happy birthday to Prince Harry today!”

Harry’s dad Prince Charles and stepmom Camilla, Duchess of Cornwall echoed the sentiment over on their Twitter account. “Wishing a very happy birthday to The Duke of Sussex today!” a tweet read.

And, of course, Queen Elizabeth II—also known as Harry’s Granny—did not forget the special occasion. “Wishing The Duke of Sussex a very happy birthday!” the Queen’s Twitter account read.

However, some fans were not satisfied with the birthday tributes from the royal family as they questioned why Meghan Markle was not included in any of the photos used in their birthday posts. For William and Kate’s, the post used a photo of the siblings and Duchess of Cambridge competing in a race.

“How rude,” one critic commented back. “Why not have a photo of him when he’s happy with his lovely wife. Really selfish of will and Kate.”

“Interesting photo selection!” another fan pointed out in a comment. “No Meghan…”

Prince Charles’ tribute included a photo of the father and son laughing along with a solo shot of Harry. “Where is meghan ?” another fan asked in a comment. “So rude even if they left.” Meanwhile, some harshly praised the posts for not including Markle.

However, the criticism seems unwarranted given the fact that for the Duchess of Sussex’s birthday in August, none of the royals’ tributes used photos of her with Harry. Still, fans tend to pay close attention to public signs of the brothers’ relationship as they’ve been the subject of rift rumors.

In Omid Scobie and Carolyn Durand‘s bombshell book Finding Freedom, the authors took a closer look at why the once close siblings drifted apart.

“It’s obviously a tragic story because, of course, they once were so close,” Scobie told E! News in August. “There’s certainly a distance between the brothers. And William, you know, wears two hats. He’s an older brother but he’s also a future king…And sometimes that dedication to his duty to the monarchy has gotten in the way with his relationship with his brother.”

Regardless, it’s a significant birthday for the younger brother, considering it’s his first one spent as a California resident and first-time homeowner. A rep for the couple told E! News in August that the family of three moved into a new home in July of this year.

Professionally, Harry has plenty of work ahead after he and his wife signed a multi-year deal with Netflix.

Fans are not happy that Prince William and Kate Middleton’s birthday tribute does not include Meghan Markle.