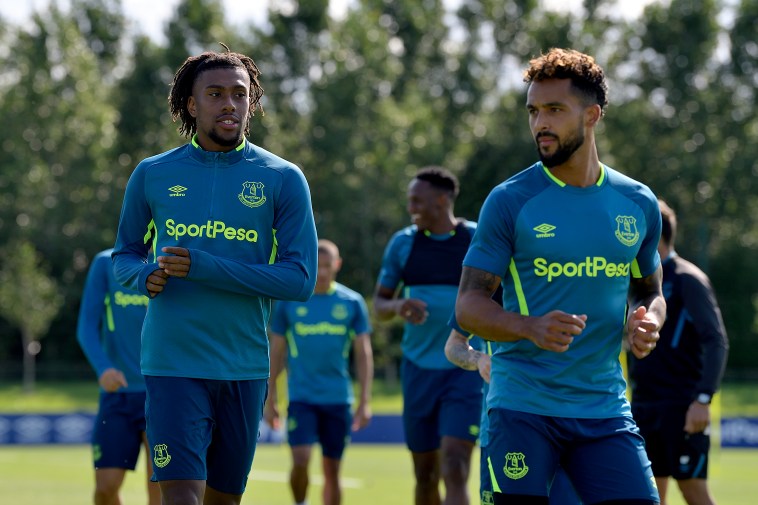 Former Arsenal stars Theo Walcott and Alex Iwobi could be axed by Everton, with Gylfi Sigurdsson’s future also in doubt, as the club plan a late summer fire sale.

The Toffees are reportedly willing to consider offers for ‘an entire team of players’ as they look to earn back some cash after their summer spending spree.

The Merseyside club has spent £60million so far this summer on the arrivals of midfielders James Rodriguez, Allan and Abdoulaye Doucoure.

And Carlo Ancelotti is not finished yet, with the veteran manager keen to bolster his back-four with the signing of Chelsea defender Fikayo Tomori.

But, according to The Times, the emphasis at Goodison Park right now is on selling players, which may include ex-Arsenal duo Walcott and Iwobi.

Iwobi only joined Everton last summer in a £34million deal, but the club are said to be considering moving him on already after his poor return in his debut season, having managed just two goals and one assist in 29 games.

The futures of Sigurdsson, Fabian Delph, Bernard and Cenk Tosun, are also uncertain, while Yannick Bolasie, Muhamed Besic and Sandro Ramirez are surplus to requirements. It appears it was £20m well spent on Everton’s star signing James Rodriguez, who was the best player on the pitch in their opening weekend win at Spurs — Image: Getty

The report claims not all of those players will be sold this summer, with Ancelotti still keen to have depth in his squad this season as he aims to deliver a return to European football.

However, it is claimed the current economic climate amid the COVID-19 crisis means that ‘the bulk’ of the players who didn’t make the starting XI for Sunday’s 1-0 win over Tottenham in Everton’s season opener will be allowed to depart.

Moise Kean is another player whose Toffees future has been in doubt over the last few weeks, having struggled to make an impact following his £25m arrival from Juventus.

Ancelotti, though, has said he wants to keep the young striker, but the club could still cash-in should the right bid come in before the transfer window shuts next month.

Some of those fringe players will also have a chance to prove their value in Thursday’s EFL cup second-round clash against League Two Salford City at Goodison.

Back to Top
Close
X
Former Chelsea star Ivanovic joins West BromPremier LeagueFormer Chelsea defender Branislav Ivanovic has completed his move to West Brom on a one-year contract. Ivanovic, 36, has been a free agent since leavi…