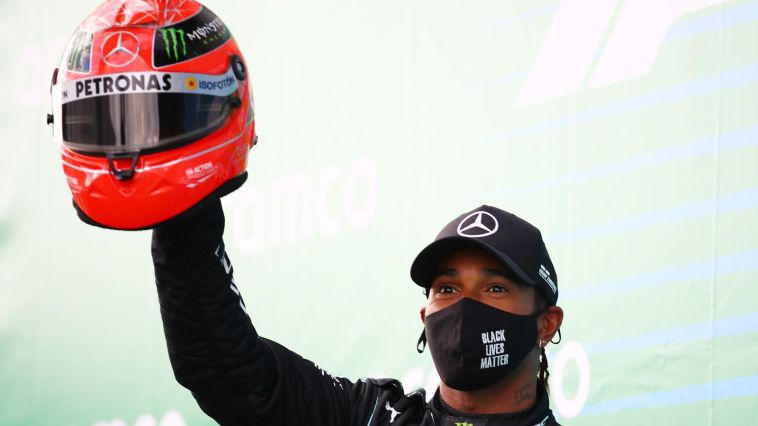 Lewis Hamilton was handed a helmet belonging to Michael Schumacher by the German great’s son after equalling his wins record in Formula One with his 91st success in the Eifel Grand Prix.

Fourteen years and 10 days after Schumacher won his last race in China, Hamilton joined the German at the top of F1’s all-time table, driving for Mercedes-AMG Petronas.

Hamilton, 35, is a six-time F1 World Champion, having won five of the last six seasons.

Alongside his joint record with Michael Schumacher, he now holds the record for career points (3661), pole positions (96) podium finishes (160) and the most championship points in a single season (413).

Max Verstappen came second for Red Bull Racing, 4.4 seconds behind the Brit, and took away the fastest lap point from Hamilton on the final tour at the Nuerburgring circuit in Nuerburg, western Germany.

Daniel Ricciardo held on to third place for his first podium for Renault, while Racing Point’s Sergio Perez came fourth, and Carlos Sainz fifth for McLaren.

Hamilton started second on the grid, but took the lead early on, winning his 261st career race, while teammate Valterri Bottas retired with a power failure.

Although the driver has not yet signed a contract for next season with Mercedes, he has said he feels he can continue to race for several years more.

The German champion has largely been a private man following a skiing accident in 2013 which left him with severe injuries and required him to be placed in to a medically induced coma.

Mick Schumacher, Michael’s son, presented Lewis Hamilton with one of his father’s helmets from a race in 2012 to mark the Brit’s achievement in equally the record.

Receiving the helmet, Hamilton said:”I really am honoured man, thank you so much. Such an honour.”

“When you grow up watching someone and you generally idolise someone… I remember playing Michael on the game on Grand Prix 2, but seeing his dominance for so long – I don’t think anyone would imagine I would be anywhere near Michael. It’s going to have to take some time to get used to.”

Hamilton currently has the lead in this season’s F1 driver standings with 230 points, ahead of his teammate Valtteri Bottas on 161, and Max Verstappen on 147.

X
Rafa Nadal destroys Novak Djokovic to claim 13th French Open title…SportsRafael Nadal was celebrating in Paris once again this Sunday and he had every right to do so. His win over Novak Djokovic saw him pick up his 13…