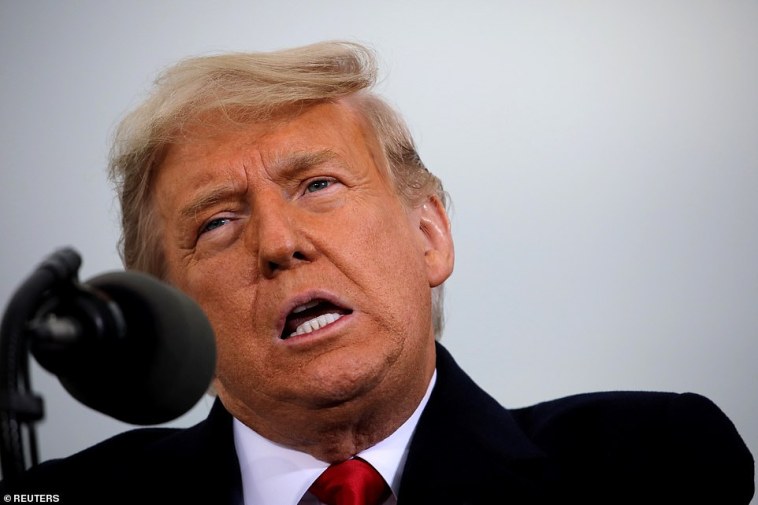 President Donald Trump boasted that he’s leading in early voting during his first of two campaign stop Saturday, this one in Muskegon, Michigan.

The president called his Democratic rival a ‘criminal’ and knocked around the state’s Democratic Gov. Gretchen Whitmer – with his raucous crowd chanting lock him and her up.

He told the crowd that the Democrats needed shown a ‘thundering defeat at the ballot box.’ ‘And by the way, it seems to be happening,’ the president said.

He admitted that he thought the election would have been in the bag had the coronavirus pandemic not happen.

‘This thing wasn’t going to even be an election,’ he said and then referenced the ‘plague.’ ‘I didn’t have to come to Michigan,’ Trump added, explaining he would have won the state because manufacturing had come back.

President Donald Trump appeared Saturday in Muskegon, Michigan for his first of two campaign rallies. He’s on a three-day spring through four key states and will also hold a fundraiser in California President Donald Trump arrives Saturday in Muskegon, Michigan for a campaign rally during a tour of four swing states over three days

Upon arriving in Muskegon, Trump realized that the wind may do some damage to his hair.

‘Get me a hat out of that plane,’ he said nodding toward Air Force One.

He also joked that he was hat-less in a seat of Trump and winter hats.

About a third of the thousands of people gathered at the airport venue were wearing masks to prevent the spread of COVID-19.

At the rally, Trump hammered Michigan’s Democratic Gov. Gretchen Whitmer for keeping the state locked down.

He also downplayed a recent right-wing militia plot to kidnap her.

‘They’re saying she was threatened. And she blamed me. And our people were the ones who worked for her people,’ Trump told the crowd. A Michigan crowd filled with Trump supporters chanted ‘lock her up!’ about the state’s Democratic Gov. Gretchen Whitmer (pictured) as the president downplayed a recent right-wing militia’s plot to kidnap her

Soon a ‘lock her up!’ chant started up.

At another point a supporter shouted ‘lock him up!’ that cue was directed at Democratic nominee Joe Biden.

Back to Top
Close
X
Pelosi, after a year of not speaking to Trump, says talks don't have to be 'person-to-pers…HeadlinesHouse Speaker Nancy Pelosi on Friday confirmed that she has not spoken to President Trump for more than a year -- but said working with intermediaries…