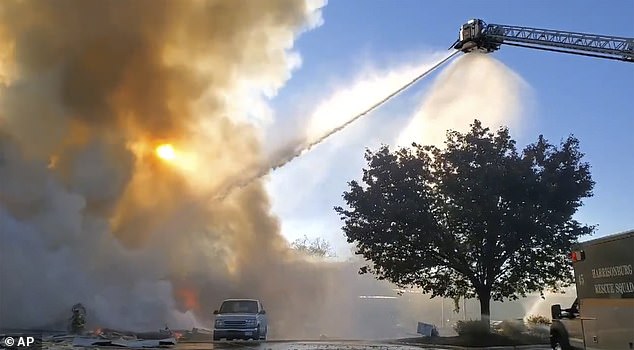 By Harriet Alexander For Dailymail.com

Three people have been taken to hospital following an explosion at a shopping center in Virginia.

Firefighters were called to the scene in Harrisonburg, 60 miles north west of Charlottesville, at around 8:30am on Saturday.

Photos and videos on social media showed a strip mall ablaze, being doused with water by fire engines, and smoke shooting 30ft into the sky.

Two of the victims were found outside the buildings and taken to hospital in serious condition, according to NBC 12.

No one is believed to be trapped inside, although firefighters are checking the buildings. Firefighters were trying to put out the blaze, which was reported around 8:30am Saturday

Ralph Northam, governor of Virginia, said they were being updated. He described it as a gas explosion, which Harrisonburg Fire Chief Matt Tobia said was unconfirmed.

‘My team and I are closely monitoring the situation in Harrisonburg after a gas explosion this morning,’ he tweeted.

‘First responders and firefighters are on the scene, and we have deployed state emergency personnel for additional support. Please avoid the area.’

‘At this time the fire is contained, but it is not yet under control. It is still active,’ he said.

He said they were not expecting any further explosions, but electricity and gas had been turned off as a precaution.

‘There is no determination of the cause or origin of this incident at all. It remains under investigation,’ he said.

They do not believe anyone was trapped inside the building.

Buildings in the neighborhood had their windows broken, and residents reported hearing the noise five miles away, according to Fox5 DC.

The shopping center reportedly featured a barber shop, vape store and Hometown Music, as well as an international grocery and the Blue Sprocket recording studio.

Harrisonburg, in Virginia’s Shenandoah Valley, is a city of around 50,000, and home to James Madison University. Firefighters are pictured surveying the devastated scene in Harrisonburg on Saturday