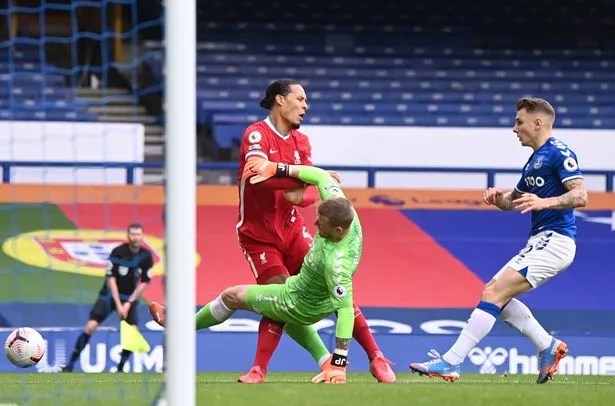 Liverpool defender Virgil van Dijk could reportedly miss the rest of the season as the result of a horror challenge from Everton goalkeeper Jordan Pickford.

Van Dijk was forced off during the Merseyside derby clash between the two rivals and beIN Sports are reporting that the Dutchman has suffered an anterior cruciate ligament injury that will cause him to “miss seven to eight months” of action.

BeIN Sports presenter Richard Keys said: “The information we are receiving is that he’s done his anterior cruciate ligament and if that is the case – well I say he’s done, with the incident with Jordan Pickford – and he will miss seven to eight months if that is the case.”

The Liverpool Echo are also reporting that Liverpool are fearful that Van Dijk could be sidelined for a ‘lengthy’ period of time.

Both Van Dijk and midfielder Thiago Alcantara were taken to hospital for scans after the game, with the Dutchman leaving the facility on crutches, but the report claims the club is still awaiting the results of those scans.

Pickford avoided punishment for his challenge, while Richarlison was sent off for his reckless tackle on Thiago.

Speaking after the game, Reds boss Jurgen Klopp admitted things were not looking good for either player.

Speaking at his post-match press conference, Klopp said: “When I left the pitch, Thiago told me in the red card situation with Richarlison he thinks he got injured.

“We will see if it’s true or not, but if he felt like this then we need to have a look. I don’t know [how serious it is for Van Dijk], I don’t know, but it is not good.

“Virgil played for us I don’t know how many games in a row. He plays with pain, he plays with pretty much everything, but he couldn’t play on. That’s not good.”

This Story First Appeared At The Daily Star