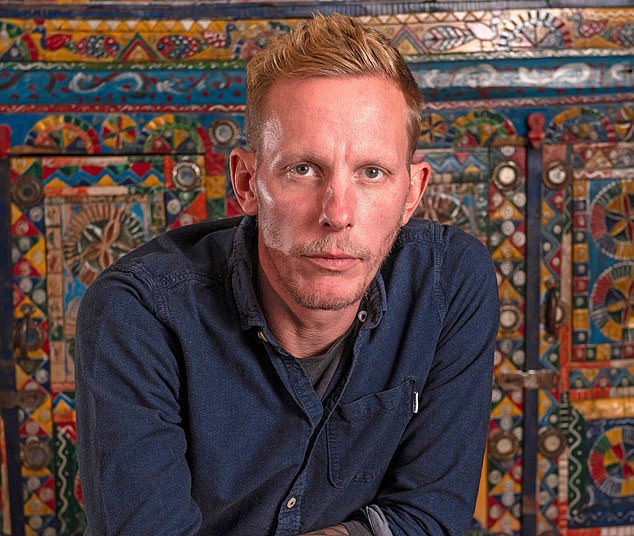 Sipping a pint of beer while talking passionately about politics, Laurence Fox reminds me of someone I can’t quite put my finger on.

Every word that comes out of his mouth is the launch-pad for a controversial opinion piece.

I pose the actor, best known for his role in the ITV drama series Lewis, a simple question. How does it feel to be the most hated man in Britain?

‘It is a crowded field,’ he laughs.

Sipping a pint of beer while talking passionately about politics, Laurence Fox (pictured) reminds me of someone I can’t quite put my finger on

Indeed, he has become a hate-figure among many since shooting to prominence in January thanks to an appearance as a panellist on BBC1’s Question Time.

During the programme, he disputed the claim that the Duchess of Sussex had been treated in a ‘racist’ way by the British press.

He also clashed with an audience member who called him a ‘privileged white male’.

And last month, he invited more obloquy by launching The Reclaim Party – to fight for freedom of speech, ‘reclaim British values’ and challenge what he regards as a ‘culture war’ taking place in Britain.

Brushing the vitriol aside, he said: ‘You wouldn’t think I was ‘the most hated man in Britain’ if you walked down the street with me. People come up and say, ‘God, that’s brave’.’

He gives short shrift to critics such as the journalist Yasmin Alibhai-Brown who branded him ‘attention-seeking’ and sarcastically said he ‘finds being privileged, male and white ever so hard’.

Fox says of another critic: ‘I don’t need to read why I seem to occupy such an unhealthy amount of space in [Guardian columnist] Marina Hyde’s mind.’

To me, Fox, 42, is an emblem of the new political cleavage, or ‘culture war’, between those who believe that Britain, and more specifically ‘white people’, are at the root of all evil, and others who maintain that we can, and should, be proud of our liberty and our history.

Back to Top
Close
X
Wichita Mayor Brandon Whipple: Man accused of making kidnapping threat against mayor…Daily MailMeredith Dowty, 59, is facing a criminal threat charge after officials were "alerted to threatening statements directed toward city of Wichita Mayor B…