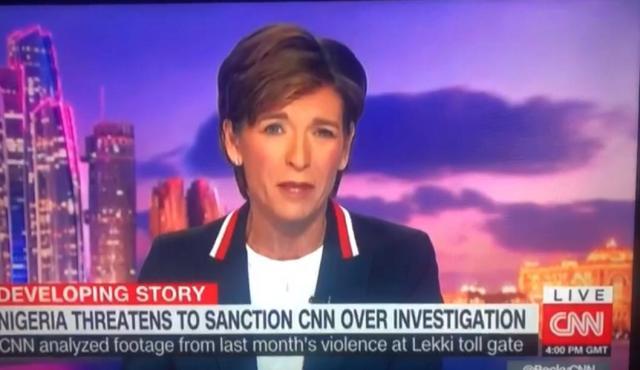 The Coalition of Civil Society For Human Rights and Good Governance Africa, has condemned in its entirety a report by the Cable News Network (CNN) alleging massacre of #EndSARS protesters at the Lekki tollgate in Lagos, on October 20, 2020.

In a strongly-worded statement, released in Abuja, the Coalition described the report as fake, repulsive and a concocted piece of deliberate falsehood by an otherwise reputable international cable network.

The group, in the statement jointly signed by Prof Bankole Amuda, Prof Uzodima Anakwe, Balarabe Hassan Ningi, and Barr (Mrs) Grace Osaze, corroborated the position of the Nigerian Army to the effect that, no protester was killed on the said day, as only blank ammunition were used by soldiers to restore normalcy.

According to the coalition, its position was based on thorough investigations conducted by a crack team of independent forensic experts.

While warning CNN and its co-travellers against deliberate attempts to undermine Nigeria’s sovereignty, the rights and good governance organisation called on the federal government to remain firm and apply the full weight of the law against local and foreign saboteurs.

Specifically, the coalition took exceptions to the fact that CNN placed heavy reliance on the same videos that have since been confirmed to be fake, to arrive at its jaundiced and premeditated outcome.

Wondering what was the motive behind the fake report, the CSO expressed confidence that Nigerians of good conscience will see the report for what it is: fake news.

It has, however, applauded the Minister of Information and Culture, Alhaji Lai Mohammed, for the way and manner he conveyed the position of the federal goveenment, at a world press conference in Abuja, Thursday.

Notwithstanding, the group has called on members of the public with genuine cases of rights’ violation, to approach ongoing judicial commissions of injuiry set up by the federal and state governments, to address such concerns.

It contended that Nigeria remained a sovereign and independent nation, which is governed by established institutions, rule of law, hence the need for aggrieved persons and groups to follow the due process in ventilating their grievances.

“We condemn the CNN and all their evil collaborators for the fake report of alleged massacre at the Lekki tollgate on October 20,…