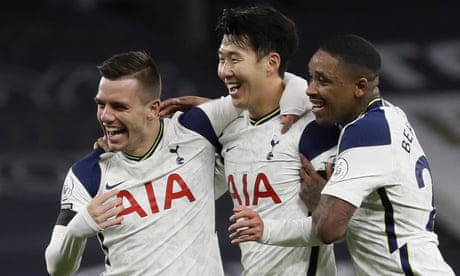 Pep Guardiola believes Manchester City’s Premier League title hopes will be over if they do not begin to win games soon, as he lamented errors at both ends of the pitch in the 2-0 defeat at Tottenham.

City were unhinged early on by Harry Kane dropping deep and drawing out their centre‑halves – Son Heung-min would run on to Tanguy Ndombele’s pass to score – while their lack of goals is becoming an issue. They have scored only 10 in eight league games this season. “The stats speak for themselves,” Guardiola said, referring to City having 22 shots compared to Spurs’ four, two of which were on target. “But we cannot concede a goal like the first one. We defended bad and we put the perfect scenario for them [at 1-0]. We conceded a goal against Liverpool [in the 1-1 draw two weeks ago] that we cannot do and today again.

“They shoot two times [on target] and score two goals. We cannot score with 22 shots. We have to shoot more on target. We created chances but the reality is we are struggling to score goals. I don’t have the feeling we are playing bad but football is the details in the boxes. There are a lot of teams in front of us [in the table] and if we don’t start winning, it [the title] will not be possible and we know it.”

Kevin De Bruyne added: “We played well but missed that cutting edge. To keep Tottenham to three or four chances is quite good but if you’re not sharp, it’s tough. There have been a lot of changes – it’s difficult to find the consistency.”

Spurs moved to the top of the table and the only blot for them was a serious abductor muscle injury for Toby Alderweireld. José Mourinho was delighted with the collective discipline of the performance.

“It’s just a good feeling to be top,” the Tottenham manager said. “This team is a process and there are good signs of evolution. I couldn’t be more pleased but this position can be fake. On Sunday, we can be second and then you lose two and become mid-table.”

This Story First Appeared At The Guardian

Back to Top
Close
X
Atlético Madrid vs Barcelona, La Liga: Final Score 1-0, Awful Barça lose bad game on the road…La LigaBarcelona’s inconsistency in La Liga conitnues and the Blaugrana are now nine points behind Atlético Madrid thanks to a 1-0 loss at the Wand…

X
More to Juventus than RonaldoSeria ASeeing the scoresheet of Juventus-Cagliari, one would think the Bianconeri have once again managed to take home the three points only thanks to the us…