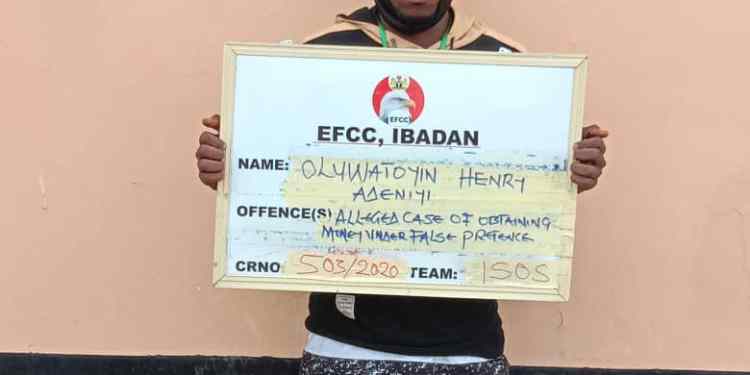 The Economic and Financial Crimes Commission, EFCC, Ibadan Zonal Office, on Monday, February 22, 2021, secured the conviction of one Oluwatoyin Henry before Justice Sherifat Adeyemi of the Oyo State High Court, sitting in Ibadan, Oyo State on one count of obtaining by false pretence.

The charge reads: “That you Oluwatoyin Henry sometimes in 2019, at Ogbomosho, within the jurisdiction of this Honourable Court, with intent to defraud, obtained the sum of One Thousand Two Hundred United States of America Dollars (USD$1,200) from one Betty Mosley, when you falsely represented to him that you are a citizen of United States of America by name Amanda, who is in love with him which representations you knew to be false and thereby committed an offence.”

The convict, who claimed to be a student of Ladoke Akintola University of Technology, Ogbomosho a pleaded guilty to the amended charge after a plea bargain agreement with the prosecution.

Based on his plea, he was convicted and sentenced to six months in prison.

He was also ordered to restitute the sum of $1,200 USD (One Thousand Two Hundred United States of American Dollars) to his victim, and forfeit his iPhone 11, one Infinix Hot 5 and a Nokia phone to the Federal Government of Nigeria.

This article originally appeared in Inside Oyo