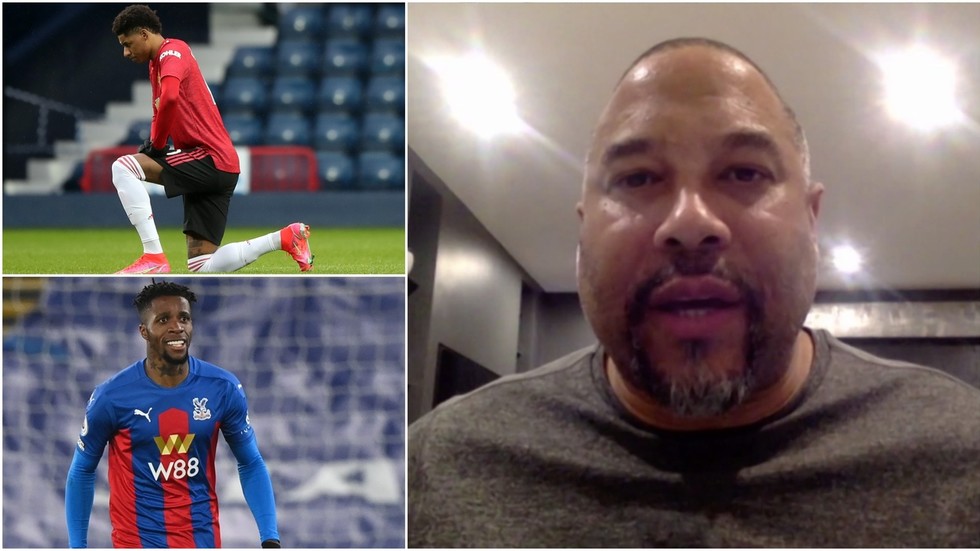 Danny Armstrong is a Moscow-based British journalist, reporter and presenter for RT Sport. Follow him on Twitter @DannyWArmstrong

Barnes’ career with Liverpool, where he was twice a league winner, and England inspired generations of youngsters and future footballers, and at the time of his retirement from international football he had won more England caps than any other black player with 79 appearances for The Three Lions.

The 57-year-old has been vocal on the issue of systematic racism that he believes has pervaded sporting institutions and the impact on sport of worldwide protests since the death of George Floyd in Minneapolis in May 2020.

In the wake of Floyd’s death, the English Premier League adopted the gesture of taking a knee before kick off aimed at promoting racial equality and to show solidarity with the Black Lives Matter movement, a decision that was almost unanimously accepted, but did not come without its detractors.

Several high profile figures Crystal Palace’s Wilfred Zaha labeled the action “degrading” and insisted black players should instead “stand tall”. Championship teamsBournemouth and Brentford announced in club statements they would no longer partake in the custom, saying it had “run its course”.

Les Ferdinand, a former England teammate of Barnes and now director of football at London team Queens Park Rangers, one of the first clubs to discontinue the action, said taking the knee had “been diluted” and dismissed it as a fad similar to a “fancy hashtag”.

In an interview with RT Sport, Barnes agreed the gesture “cannot change systematic racism” and said he encourages players in all sports to find other avenues to do more than replicate a token gesture to highlight the issue within the game.

Crystal Palace star Wilfried Zaha says he will no linger take the knee, calling it ‘degrading’ and insisting players should instead ‘stand tall’ – Reuters / RICHARD HEATHCOTE

“First of all, taking the knee highlights the problem, and it’s been highlighting the problems since the George Floyd situation,” Barnes told RT Sport via Zoom.

“That’s all we can do can’t do anything to change people’s perceptions, taking the knee can’t change systemic racism, taking a knee, or walking off, appeal or refusing to play when you have a policeman who is going to stop a black person, or shoot a black person because his perception of him unconsciously or not, is that he’s a crook.

“He’s not going to think to himself, if I shoot them, or stop this black person, the LA Lakers aren’t gonna play basketball, so I’m not going to do it. So all sport can do, because it’s media tentative and high profile, is highlight the problem. Now, we’ve been highlighting the problem in the Champions League of passing it around the line saying no to racism for 15 years, and nothing has changed.

La Lakers players, including LeBron James, take the knee before a game at the LA Clippers – Reuters / Mike Ehrmann

Barnes was careful to make the distinction between focussing on isolated events of racism and racial inequality, and insisted the finer details of discrimination lie much deeper, such as the lack of resile available education for black people in the poorer, inner-city areas.

Racism in football has been apparent in pockets of support such as when England’s UEFA 2020 qualifier against Bulgaria in Sofia in 2019 was twice halted after the home section was infiltrated by neo-fascist groups who made monkey chants and Nazi salutes at England’s black players.

Another more prevalent but less easily manageable problem has emerged on social media, where a number of players, including Manchester United’s Anthony Martial, Arsenal’s Willian and Swansea City’s Yan Dhanda were among players racially abused on Twitter and Instagram after poor performances for their club.

Barnes believes the problem lies much deeper and rather than focus on numerous isolated incidents, that energy would be better centred on its root cause, suggesting opening a dialogue on socio-economic problems minorities face and black on black violence in the inner-cites.

“Well we have to analyze or decide what we think racial inequality is. Black kids in the inner cities can’t get an education, access to housing, social care, jobs, under disproportionately every single day discriminated against as they walk down the street. For me, that’s racial inequality,” he said.

“Now, why that’s what we should focus on, we should also try and stamp out racism racist incidents, as we see. But for that black player who talks about racial inequality, who for six days of the week, six and a half days of the week, can go to the front of any line in front of white people can get into any club, any restaurant will have doors open for him – is that racial inequality?

“So we have to decide what we believe racial equality to be and what our focus has to be yes, from a planning perspective and a sporting perspective.”

“We’ve got to stamp out racism bananas on the field, but we seem to be highlighting not only highlighting focusing all our energy and money on trying to get Bulgaria banned and trying to get a 12-year-old football fan, sent to prison or trying to get some idiot who can’t spell his own name, who is happy for people to talk about him by going on social media and abusing a black I player that’s what we focus on whereby the real problems that are happening in the inner-cities which has kept black people down for hundreds of years and will continue to do so which are being ignored. That for me, is what I’m interested in doing.”

One prominent figure in the fight against inequality is Manchester United and England forward Marcus Rashford, who has campaigned for poverty-stricken UK children to receive government subsidized meals during the Covid-19 pandemic.

Barnes believes Marcus Rashford, who persuaded UK government to change their policy on proving school meals to poverty stricken children during the Covid-19 pandemic, will be an influential figure in challenging racial inequality – Reuters / NAOMI BAKER

Barnes says more high-profile players like Rashford should be using their platform to challenge government policy and help black people in the poorer inner-city areas and challenge disproportionate misrepresentation at a fundamental level and also within the elite to benefit ‘99%’ of blacks, rather than just ‘1%’.

“And Marcus Rashford. He’s the one who’s doing it, he’s talking about, forget about race, it’s an underprivileged situation whereby black kids are disproportionately represented in that sphere. He’s talking about trying to change things for them. He’s not talking about alternatives for him. And he’s not also saying, I’m going to give you £20,000 of my own money,” he said.

“What he’s saying is that I can use my platform to change government, principle, government policy, which he has done to then say, we’re going to feed inner-city kids, throughout the summer holidays, imagine if more black players, not just athletes, superstars were to do that, that would help 99% of the black community, we’re trying to help 1% of the black community, the elite, and they’re not people doing that. So that’s not what I’m about.

As a player who inspired a generation of youngsters regardless of race, Barnes’ career mirrors that of current star Rashford’s in more ways than one, as the two are now engaged in combating socio-political discrimination by using their platforms as prominent sports stars. Barnes thinks to insure the message is carried to future generations, the focus should remain on making life better for this in the poorest areas of society.

“It depends on what continues to happen. If he then continues to look at social issues, and take on a stance, I am going to try and help the black kids in a city kids in which are disproportionately represented,” Barnes said.

“[He could] then say, ‘well, what we need now is more black men in the boardroom, and more black managers’… forget about what’s going on the inner cities, forget sports.

“This has been happening for 1,000 years: an elite group of people who wanted more power for themselves have used the people as an excuse to say, I will help the people by me getting more power, that has never happened.”