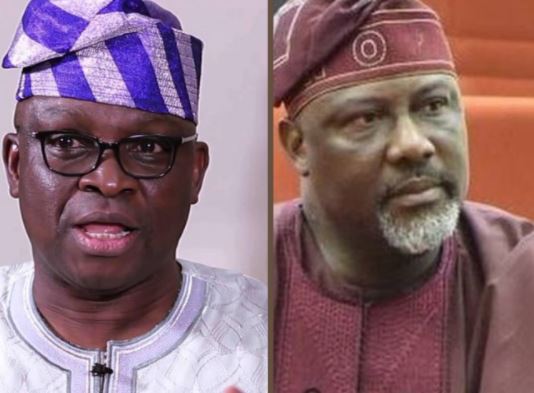 A group in the South West People’s Democratic Party (PDP) led by former Governor of Ekiti State, Ayodele Fayose, has rejected the choice of Senator Dino Melaye as Chairman of the Congress Screening Committee.

The group insisted on Senate Minority Leader, Enyinnaya Abaribe, earlier agreed upon by both parties, saying “the sudden emergence of Senator Dino Melaye is suggestive of a planned hatchet job.”

This was contained in a release jointly issued by Fayose, PDP governorship candidates in Osun and Ogun States, Senator Ademola Adeleke and Hon Ladi Adebutu respectively as well as the immediate past Zonal Chairman and aspirant in the next Monday Congress, Dr Eddy Olafeso.

They said “What the party told us was that Senator Abaribe will be chairman of the screening committee.

“To us, this sudden use of Senator Dino Melaye is suspicious and we will not accept it.

“If Senator Abaribe is not available, there should be someone acceptable to the two parties to replace him, not Dino Melaye.

“Therefore, for equity, fairness and transparency, we call on the National Working Committee to replace Senator Dino Melaye with someone that is acceptable to both contending parties as Chairman of the Screening Committee.”

Back to Top
Close
X
Protest against Buhari’s UK medical trip attack on the North –-Matawalle…Political LandscapeRipples Nigeria Zamfara State Governor, Bello Matawalle, has warned those who have been protesting against President Muhammadu Buhari’s medical vacati…