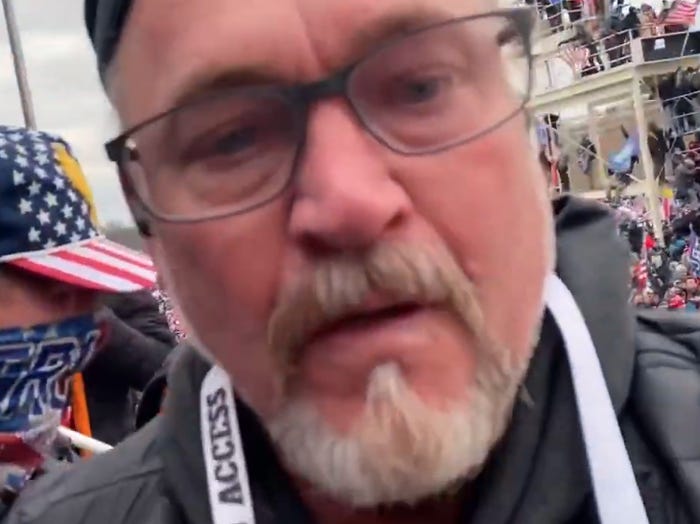 Unlike legitimate reporters who kept a safe distance from the rioters, the 60-year-old YouTuber was in the midst of the chaos of January 6.

As the pro-Trump mob around him attacked police officers with stolen batons and riot shields, Morgan recorded himself and others whooping and cheering as the storming of the Capitol took place.

Watch Morgan’s participation in the Capitol insurrection in a video obtained by Insider.

“Go through the windows,” Morgan urged the mass of insurrectionists.

Now, the man who claimed to be there as an “independent journalist” is charged with four counts for his role in the Capitol riots, including aiding and abetting the deadly insurrection.

Morgan traveled from Texas to attend the Capitol riot. His main source of income is tree removal which, according to his business’s website, he got into after struggling to keep a full-time job because of a “sleep disorder.”

He only became an arborist to bankroll the launch of his internet marketing career, he wrote on the website. This, so far, has been unsuccessful. Two businesses he set up now appear to be defunct.

In recent years, he has been dedicated to growing a YouTube following for his channel — “Political Trance Tribune” — posting ‘civil rights audits’ on it for nine years. The page has nurtured a small but reasonably engaged following; 3,600 subscribers and over 100,000 views.

If officials allow filming to take place on public property, they pass the audit. If they refuse, they fail the audit and they end up being exposed on YouTube channels. Auditors say they are there to exercise their First Amendment rights but, as the Daily Beast reported in 2019, dramatic confrontations can lead to YouTube fame.

Many of the run-ins published on Morgan’s channel involve tense, dramatic interactions with police officers.

Morgan, who is described in his affidavit as an “independent journalist and a civil rights auditor,” is often seen deliberately aggravating law enforcement officers. This aligns with his anti-cop views, as expressed in a now-deleted YouTube video seen by Insider. “I happen to think we need to abolish the police,” he said in the clip from January.

Other clips show him being threatened with prosecution for provoking officers. On one occasion, Texas’ Montgomery County Court records show that an incident led to his arrest.

He was placed in Montgomery County Jail on June 9, 202o, for “interfering with traffic control and scene securement efforts,” according to an arrest warrant seen by Insider.

He believes that 9/11 was an ‘inside false flag job’

Morgan’s anti-police views are part of a wider set of conspiratorial and far-right views.

On his private Facebook page, Morgan shared posts that denied the climate crisis, challenged the fact that former President Barack Obama was born in the US, and called 9/11 an “inside false flag job.” He also frequently shared posts by the far-right publication Breitbart News and conspiracist website InfoWars.

More recently on Political Trance Tribune’s Facebook page, Morgan showed allegiance to QAnon — the disproven and discredited conspiracy theory. Some posts are captioned with the hashtag #WWG1WGA, which stands for the QAnon slogan “Where we go one, we go all.”

A video of Morgan attending a rally for then-President Donald Trump in Houston in 2018 also uses this caption.

Despite attending Trump rallies, Morgan appears to have made a small donation to a Democratic cause a year later. A man of the same name and sharing the same zip code donated $5 to ‘Friends of Andrew Yang’ on September 17, 2019, via left-leaning fundraiser ActBlue, according to data from the Federal Election Commission.

However, the vast majority of his posts are supportive of Trump and critical of former President Barack Obama.

Before the January 6 riots, his last post shows Morgan attending dinner with fellow civil rights auditors, several of whom are believed to have traveled with him to Washington, DC.

Unauthorized press passes are being used to mount legal defenses

According to his affidavit, Morgan told an FBI special agent in March that he had traveled from Maxwell, Texas, to Washington, DC on January 6  to witness “something unprecedented.”

He claimed that he merely wanted to record the event, according to court documents.

“Me and several other auditors, we were gonna go, and I said I really want to be there to report,” Morgan claimed in a now-deleted video posted after January 6 and seen by Insider.

He traveled to the Capitol with five other civil rights auditors who sometimes referred to themselves as “independent patriots,” his wife, Sheila Morgan, told special agents.

One was Matthew Wrosch, also known as the Michigan Constitutional Crusader, who provided Morgan and several others with unofficial press lanyards before the riots.  This was to show that the men were “journalists” who were “disseminating information to the public,” he told Insider.

The passes, however, were not authorized by any recognized body and do not count as media credentials. Nonetheless, these homemade passes and claims of being journalists are being used as evidence by several defendants to mount First Amendment free speech defenses in court, Insider previously reported.

But while Wrosch stayed “fifty feet away” at all times and “didn’t get up close and get in the fray,” Morgan joined the melee of rioters as they forced their way into one of the Capitol’s entrances.

In an hour of self-recorded videos seen by Insider, Morgan shows himself to be sandwiched between insurrectionists as they smash a Capitol window and fight with police officers. He can be heard throughout, encouraging them, yelling “keep moving” and “send helmets forward.”

Several times, Morgan can be heard begging to be shot and teargassed. “I’m here first, y’all gonna slide in right behind me,” he said. “I’m gonna take the bullet first. I want the bullet. Give me my bullet.”

He urged people to “hold the line” and repeatedly asked to be let into the Capitol. “Hell yeah, we’re going over. We’re going in that building,” he said.

‘I bought into the provocateurs’ trap.’

A couple of days after the deadly insurrection, Morgan did a two-hour-long live stream about why he joined in with the storming of the Capitol. Insider recovered the footage.

In the live stream, he explained to his subscribers what had initially inspired him to attend. “I went on January 6 with the knowledge and belief that the election was rigged,” he said.

He then spoke, at length, about the media being a “Nazi propaganda machine,” and ‘Q’ being right.

The 60-year-old did admit that he joined the mob in pushing their way into the Capitol.  “When I got up to the doorway, I participated in the heave-ho, heave-ho,” he said. It felt like the “right thing at the moment,” he added.

Morgan apologized several times for falling into “antifa’s trap” and blamed his actions on “emotion” and “herd mentality.”

“I was wrong,” he said. “When I went on that Capitol grounds and ‘antifa’ sent that message out that what we’re there for is to take the Capitol, I bought into it. I bought into the provocateurs’ trap.”

There is no evidence of ‘antifa’ being responsible for the violence during the Capitol riots.

Morgan told his subscribers that he was prepared for any potential punishment. “If I did something heinous and wrong and I have to pay for it, I’m a grown man, I can pay for it,” he said. “I’m not gonna scream and holler and cry. I did what I did out of a pure heart and pure intent. I wish I hadn’t done it. I wish I hadn’t fallen into antifa’s trap.”

He is charged with aiding and abetting the insurrection

Morgan may soon “pay for it.”

His videos were supplied to the FBI on January 19 and he was then identified by special agents. On April 9, he surrendered to Austin agents and was charged for his role in the insurrection.

Morgan is now accused of knowingly entering or remaining in any restricted building without lawful authority, violent entry and disorderly conduct on Capitol grounds, obstruction of an official proceeding, and aiding and abetting. If convicted, he could face several years in jail.

Experts say that a legal defense claiming to be a journalist is unlikely to stand in court.

Lucy Dalglish, the dean of the University of Maryland’s Philip Merrill College of Journalism, told the Associated Press that journalists need to be credentialed and cannot claim to be reporting if there is evidence to suggest they were encouraging the violent mob.

For Morgan, the lessons learned from the events of January 6 might have come too late.

“I’ve learned a lot,” he said in his live stream. “From this day on, my auditing is gonna be a lot different.”

Back to Top
Close
X
Opinion: Donald Trump saw it comingTrumpCNN.com - RSS Channel - HP Hero That call, which Trump defended as "perfect," and the administration's pausing of security aid to Ukraine, would becom…

X
U.S. base in Afghanistan hit by rocket fire as troops begin withdrawal…United StatesWashington Times A key airbase in Kandahar, Afghanistan, was hit by rockets Saturday, prompting American forces to fire back with a “precision strike”…