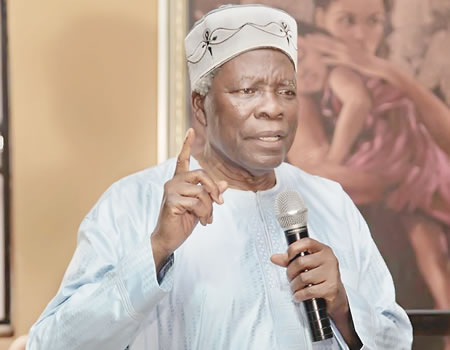 IBADAN – The leader of the umbrella body of Yoruba self-determination groups, Ilana Omo Odua, Emeritus Professor Banji Akintoye, has hailed one of the Yoruba Self-Determination Movement, YorubaNiMi Omo kootu-ojire and its Founder, Iyalode Titilayo Ajoke Ojeleye, over the success of the peaceful rally held yesterday in Abeokuta, Ogun State capital, to drum up support for the actualisation of the Yoruba Nation.

Prof. Akintoye, in a statement made available to the newsmen on sunday through the Media and Communications Secretary of Ilana Omo Oodua, Maxwell Adeleye, said the struggle for the actualisation of Yoruba Nation has gone beyond what the Nigerian State or anyone can stop, stating that “No One Can Stop an Idea Whose Time Has Come”.

Akintoye in a copy of the statement made available to SUNDAY INDEPENDENT advised all Yoruba Self-Determination Groups under the co-ordination of Ilana Omo Oodua across the Yoruba speaking states to emulate the Yoruba Ni Mi Omo kootu-ojire group who planned and majorly funded the Abeokuta rally, saying “all our affiliated groups are advised to now start organising rallies and road shows in all states in Yoruba Land every weekend to educate our people on the danger associated with the continuous stay of the Yoruba people in Nigeria”.

“I congratulate the Yoruba people, especially, the membership and leadership of Yoruba Ni Mi Omo kootu-ojire led by Iyalode Titilayo Ajoke Ojeleye for their patriotic display yesterday in Abeokuta, Ogun State in defiance of the Nigerian State Agents who attempted to foil the mass action.

“Let me now say very expressly that it is about the rallies that the Yoruba people must hold round and round our Yoruba homeland from now on to promote our self determination struggle.

“However, let me warn that all our people should note that each rally must be conscientiously peaceful, lawful and orderly.

Back to Top
Close
X
Buhari, security heads to meet on TuesdayHeadlinesNews – Vanguard News By Johnbosco Agbakwuru The security meeting held on Friday and presided over by President Muhammadu Buhari with all the security …

Yoruba Nation Agitation: No one can stop idea whose time has come – Akintoye

X
Afenifere was right by refusing to support Buhari – Fasoranti…HeadlinesBy Peter DadaThe pan-Yoruba socio-political organisation, Afenifere,  on Sunday said corruption and nepotism were the hallmarks of the administra…