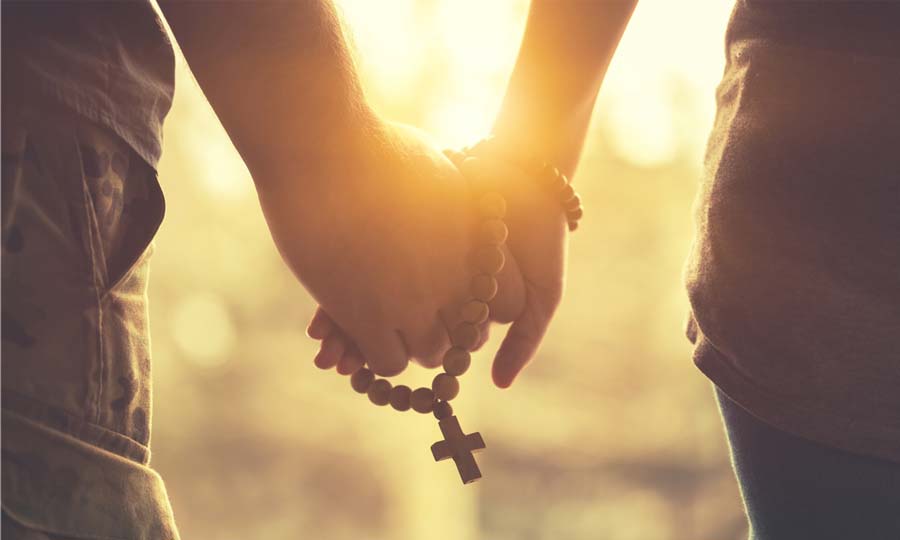 The institution of marriage dates back to almost the beginning of written history, with countless variations on how it has been practiced throughout the ages in different cultures and religions. The medieval era was no different. Many marriage traditions still survive today from the Middle Ages, passed down through the centuries along with Christian ideas and practices. Nevertheless, the medieval custom of spiritual marriage is one practice which has not survived into modern times.

The practice of spiritual marriage, in which a married couple would agree to abstain from sexual intercourse of any kind, began in Western Europe in Late Antiquity with the spread of Christianity. It continued throughout the medieval period with some measure of popularity among religious devotees. But why would a married couple choose to live this way? How did their choices affect their place in society at large? To understand the concept of spiritual marriage, we must examine its beginnings in the late antique period.

St. Augustine of Hippo was a Roman bishop, theologian, and philosopher who was born in 354 AD. He is known as one of the fathers of the Latin Church and of Western Christianity. Augustine wrote many influential theological works including The City of God and Confessions. He also wrote several treatises on marriage and sexuality , the most well-known being The Good of Marriage . His theories became so dominant in Western Christian thought that Augustine was considered the authority on marriage, continuing to influence Christian ideas about marriage even in the present day.

It was St. Augustine who first conceived of the concept of a spiritual marriage. Although the practice was not new in the 4th century, none of his predecessors had managed to define the practice in such clear terms:

“In the earliest times of the human race… the saints were obliged to make use of this good of marriage, to be sought not for its own sake but as necessary for something else. But now, since the opportunity for spiritual relationship abounds on all sides and for all peoples for entering into a holy and pure association, even they who wish to contract marriage only to have children are to be admonished that they practice the greater good of continence.” 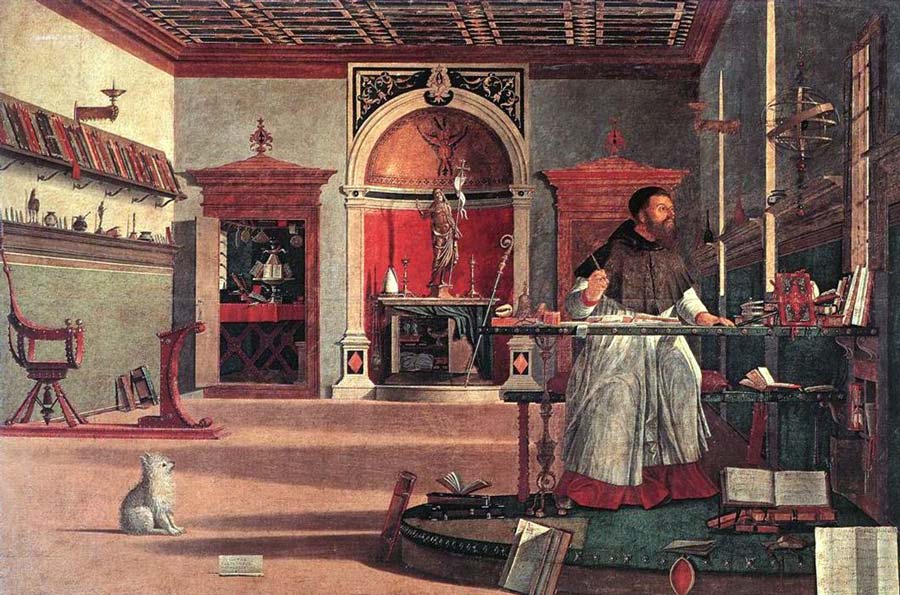 The brainchild of spiritual marriage, St. Augustine, in his study. ( Public domain )

For Augustine, continence from all intercourse was the greater “good”, while marital intercourse was only good if for the purpose of conceiving children. Nevertheless, he believed that it would be better for human society to have no need of marriage. Following his line of thinking, unmarried people were able to devote themselves wholly to the Lord, while married people were obliged to be concerned with the Earthly as well as Divine in that they had to please their spouse as well as God. In fact, Augustine argued that if not for the Original Sin, marriage would not have been necessary at all for procreation:

“If our first parents had not sinned, they would have had children in some other way, with-out physical coition, out of the munificence of the almighty Creator, who was able to create them without parents, and who was able to form the body of Christ in a virgin’s womb, and who, to speak now to the unbelievers themselves, was able to grant progeny to bees without intercourse.”

It is not that Augustine saw marriage or marital intercourse as inherently sinful, only that he believed that a marriage based on spiritual kinship, rather than carnal affinity, was preferable. There were two ways in which Augustine envisioned spiritual marriage might be practiced. The first was that after a period of normal marriage, presumably during the couple’s youth when they would engage in normal sexual activity to conceive children, the couple would transition to a state of abstinence later in life by mutual agreement.

The second form of spiritual marriage in Augustine’s treatise was that in which a couple never engaged in sexual activity. The marriage would remain unconsummated and the pair would live together in virginal chastity for the duration of the marriage. The virginal union was considered ultimately holier than chastity following marital intercourse. Having said that, it was also by far the more controversial of the two because the reality of spiritual marriage was vastly different from the theoretical concept.

Virginal marriages were the only type of spiritual marriage recognized by the early medieval church, and they replicated the apex model of Christian marriage – that of the Virgin Mary and Joseph. The marriage of Mary and Joseph was the first recorded instance of spiritual marriage and was considered to be the pinnacle of perfection by medieval theologians. This was viewed as a pure union untouched by carnal desire, which nonetheless produced a child through immaculate conception.

Many early medieval hagiographies or saint’s lives, particularly those about female saints such as St. Aethelthryth of Ely, revolved around this concept of “Holy Virginity” and their narratives focused on the trials and tribulations of the heroine as she fought either to avoid marriage altogether or maintain her chastity in an unwanted marriage. Virginity was the main avenue by which females achieved sainthood until later in the medieval period. Following a crisis of masculinity in the 11th century, the concept of Holy Virginity began to be monopolized by male saints.

Virginal marriages were problematic for the medieval church however, because while in theory they were superior to normal conjugal marriages, in practice they presented a challenge to the central tenets of patriarchal society and the gender hierarchy upheld by the institution of marriage. Intra-marital chastity magnified the “dangers” of female insubordination and “unnatural vice” in men such as homosexual intercourse, as opposed to chastity in widowhood or following a period of normal marriage, which would maintain the normative gender hierarchy .

The Virginity and Marriage of Christina of Markyate

The medieval church made attempts to control the practice of spiritual marriage in a way that minimized the potential for damage to the established social hierarchy. Some of the ways this was done can be seen in the narratives of female saint’s lives. Christina Markyate, for example, was a 12th century saint born around 1096 in Huntingdon, England.

The daughter of a wealthy family, Markyate escaped her betrothal, to a man she didn’t want, to become a nun and later prioress of an abbey. Christina is said to have been chosen for protection by the Virgin Mary before her birth, when Christ appeared to her mother in the form of a dove, a sign that the child would be holy in mind and body.

Christina took a vow of chastity at a very young age, deciding to preserve her virginity for God. The vow was confirmed before God by her confessor, Sueno. It is key to note that although Christina’s vow was taken without permission or the presence of witnesses, the vow was formalized by a man of the church and thus became valid in the eyes of the medieval church. To break a vow of chastity was a very serious spiritual offence and it superseded any other vows made after, as it was a pact made directly with God.

This meant that when Christina’s parents made a contract of marriage for her at the “malicious” insistence of a Bishop named Ranulf, her stubborn refusal to obey their wishes was not seen as insubordination, but rather as noble and holy because her actions were guided by Christ. Her “determination not to be defiled by submitting herself to the carnal embraces of a man” impeded every one of her parents’ wily plans until out of desperation, they concocted a plot to “let her betrothed secretly into her bedroom so that, should he find the maiden asleep, he might suddenly violate her.”

Christina of Markyate and Her Spiritual Marriage

Once again however, their plans are thwarted and Christina instead welcomed the young man, Beorhtred, by speaking to him of the virtues of chastity. She invited him to “join hands in agreement that neither meanwhile will touch the other unchastely” after they were married and living together a husband and wife. She proposed that after three or four years both would receive religious habits and go to join a monastery.

Beorhtred initially agrees to this, but after chastisement from Christina’s parents he was coerced into trying once again to “act the man” and force himself on Christina in her bedroom. She eluded him however, clinging to a nail behind the curtains so that she could hang between the wall and the curtains to hide.

For spiritual marriage to be acceptable in church doctrine, it had to be a decision made by mutual agreement and not unilaterally by the female. The man, as the ruler of the house, held ultimate authority and thus a decision could not be made by his wife, understood to be his subordinate.

Ideally though, those wishing to remain virginal were not supposed to marry at all and…