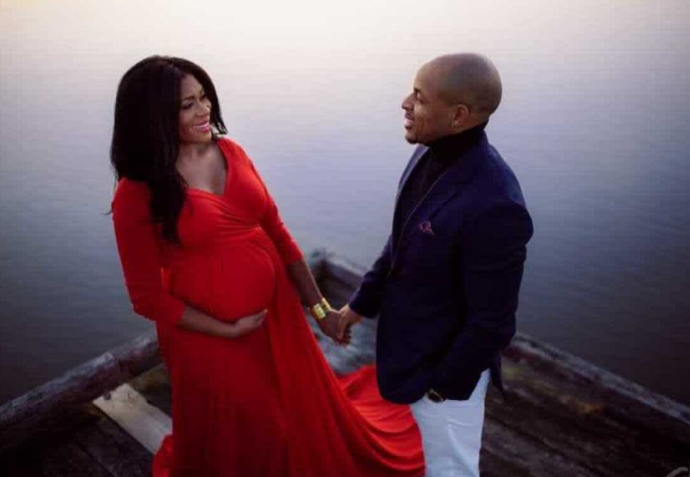 Kimberly Holmes-Iverson became a widow at the age of 35. Her life plunged into a dark hole only to be restored through, family, friends, faith, new love, and a baby by her dead husband.

Kimberly did not get to live her picture-perfect life when her husband Rasheed Wiggins was killed in a horrid accident a few meters from their Florida home in the middle of the night.

“Investigators still have not been able to charge the driver of the first car or track down the driver of the second car,” she said to Love What Matters. “That still-open hit-and-run homicide killed not only my husband but also the life and dreams I had imagined, including what I believed would be a future with children.”

She had always wanted to raise children with her late husband Rasheed. Kimberly made that happen even after she entered “chapter two” of her life with a man she describes as God sent. She married Darian Iverson, an old friend, on June 19, 2020.

Before being scientifically impregnated by her late husband, she had a nice paying job as a reporter and lived her best life with Rasheed, taking vacations often because they could afford to.

Then everything halted when he was taken away from her suddenly. The option to remain in the darkness was all she knew and wanted to do. Her close associations did not want that for her, and they stood by her praying with her.

Chats with her grandmother, therapy, and the desire to give herself a second chance at life pulled her out of the situation. Her current husband, Darian, came in just in time to help her pick up the pieces of her life.

“I’m so incredibly grateful for the love of the man who came after …”The man who waded into my confusion and heartache and volunteered to stand with me in the darkness.”

At the time, she had discovered that semen could be extracted a few hours after a man dies. “Doctors extracted Rasheed’s contribution to a child and froze it, and for years, I did my part to try to make a baby with my late husband,” she said.

When she met Darian, she spoke with him about the idea of getting pregnant using Rasheed’s genetic material. He was okay with the idea, she said. “In fact, he drove me to one of my appointments to a Florida fertility clinic where I had my eggs extracted twice in my ongoing journey to have a child with Rasheed,” she said.

With her ever-supportive husband by her side, Kimberly and Darian welcomed their baby girl. “Darian and I decided to name our child Kiran, which is both a combination of our names and means light,” she said.

“For sometimes, in your darkest hour, if you give yourself time and do the hard work of wading through the pain to try to reach your healing, you find your light.”

Back to Top
Close
X
New York Times publishes then deletes article claiming watermelons were found on Mars…Last PostFuturism By Jon Christian The New York Times is having a strange day. This afternoon, the prominent newspaper published an article making a surprising…

The woman who gave birth using her dead husband’s sperm