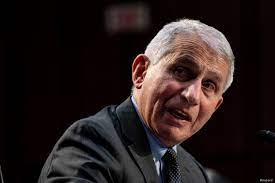 While the White House and the media have defended the sometimes confusing messages in Dr. Anthony Fauci’s newly released emails, a key analyst said the writings reveal a “most complete misunderstanding” of how COVID-19 spread and constant flip-flopping by the coronavirus czar.

Economic analyst Phil Kerpen, who shifted focus to the COVID-19 pandemic over the past year, said the emails showed that Fauci’s public comments often clashed with his private words.

And, he added, the emails also strongly suggest that the virus was not natural but man-made in a Wuhan, China, lab, though likely released accidentally and not as a bioweapon.

“He’s massively flipped and flopped and flipped on everything,” said Kerpen, the president of the conservative group American Commitment and an anti-tax leader.

New bombshell emails have been released from a FOIA request of Dr. Fauci that shows a disturbing discrepancy between what Dr. Fauci has said to the American ...

Kerpen, who used his Twitter account to chart virus news over the past year, gave his views during the weekly Ann and Phelim Scoop podcast of conservative media activists Ann McElhinney and Phelim McAleer.

He noted that while Fauci, the director of the U.S. National Institute of Allergy and Infectious Diseases, was “all over the map” on stopping the virus, challenging him was difficult.

He cited the discussion in the emails of the virus spreading in the air and how masks and distancing would do nothing to stop that, but how Fauci went on to recommend both.

Daily Caller on Twitter: "FAUCI: "A lot of what your seeing as attacks on me quite frankly are attacks on science because all of the things I have spoken about from the very beginning have been fundamentally based on science." pic.twitter.com/O1oVkueEKR / Twitter"

FAUCI: "A lot of what your seeing as attacks on me quite frankly are attacks on science because all of the things I have spoken about from the very beginning have been fundamentally based on science." pic.twitter.com/O1oVkueEKR

“This has always been the most amazing thing to me about Fauci. The guy’s literally been on every single side of every significant question. Masks. No masks. Double masks. Goggles. No asymptomatic spread. Lots of asymptomatic spread. The herd immunity threshold is 60%. Now it’s 75%, now it’s 90%. I mean, he’s just been all over the place,” said Kerpen.

No wonder he gets along so well with Cuomo. pic.twitter.com/9iKQDI6qPv

In analyzing the emails, Kerpen added that while Fauci has stuck with his belief that the virus came from an animal, the explosion of the virus in Wuhan, the shutdown of the city, and the world panic suggest it was released by China, likely accidentally.

“I think that the panic and the total hysterical reaction of Western governments only makes sense if they believe it was something other than a natural virus for which we had all the pandemic planning and guidance, and none of it is set to react this way,” he said.