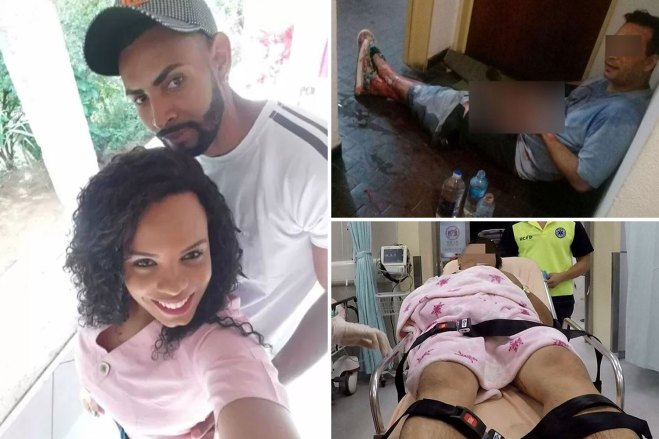 IT’S a horrific act of brutality by a woman scorned – and one designed to rob a partner of his manhood, if not his life.

This week Brazilian Dayane Machado became the latest woman to slice off her husband’s penis – before frying it in soybean oil.

Machado, 33, was arrested in the Brazilian city of Sao Goncalo after allegedly murdering husband Andre and cutting off his manhood with a kitchen knife, following an argument.

Andre’s sister, Adriana Santos, claimed Machado killed her brother in revenge for him cheating on her.

But her lawyer, Carla Policarpo, has said that Andre threatened her and she killed him in self-defence.

The couple, who have an eight-year-old son and a five-year-old daughter, had been separated for two years, but still continued to see each other on and off

Machado, who was charged with murder, joins a small band of women who have mutilated partners in an extreme act of revenge.

Lorena Bobbitt, from Virginia, was the first to make headlines around the world when she cut off her husband’s penis and drove away with it in her car, in 1993.

The couple had been married four years but Lorena claimed John Wayne Bobbitt emotionally, sexually and physically abused her throughout the marriage.

She said he cheated on her and forced her to have an abortion, as well as stealing from her.

On the night of June 23, 1993, she hacked off his tackle with a kitchen knife then drove away in her car before throwing it into a field.

The penis was reattached again after a police search, in an operation which took nine and a half hours.

Lorena was found not guilty, due to insanity, and underwent a 45-day evaluation at a hospital before being released.

Victoria Frabutt used rose-pruning shears to cut off her husband’s penis, in 2019, as a warning against “sinning against God and fornication.”

The 56-year-old from North Carolina tied up James, 61, before hacking off his manhood and then ringing the emergency services.

She initially told cops someone was in need of “spiritual assistance” before adding they may be in some “physical pain.”

In the 911 call, Frabutt allegedly went on to say that her husband, who she referred to as her soon to be ex-husband, was not seriously bleeding.

She added that she had cut off her husband’s “favourite part of himself” but was disappointed there wasn’t “enough blood to make the sign of the cross, or write sinner, or anything like that.”

Major Jason Wank, of the local Carteret County police force, said cops at the scene put the appendage on ice and took James to a nearby medical centre for surgery.

Victoria Frabutt was charged with kidnapping and malicious castration.

Garden shears were also used by Brenda Barattini, in 2017, when she sliced off her lover’s manhood at his home in Cordoba, Argentina.

The 40-year-old victim, identified only as Sergio F, later testified: “We started having sex and she told me that she was going to give me a surprise, that she had something to give me.”

Brenda, 26, had then covered his eyes with a velvet mask and “told me to guess what she touched me with.”

She then performed oral sex on him before cutting off 90 percent of his penis and a testicle.

Sergio, who managed to get away and call paramedics, said: “I felt like I was going to die.”

Trainee architect Brenda denied attempted homicide but was jailed for 13 years for the attack.

During the trial, she claimed he “treated her like a trophy,” and shared explicit videos of her with his friends.

“He violated my intimacy, my life and my career. It ruined everything,” she said.

X
Lad’s gruesome last moments as he was boiled alive then dissolved in Yello…More NewsDaily Star Yellowstone National Park is home to a whole host of fearsome beasts as well as a 'supervolcano' capable of wiping out humanity. But none o…