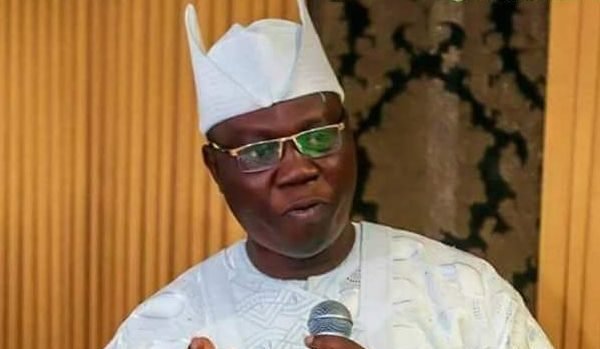 The Aare Onakakanfo of Yorubaland, Gani Adams, says it is not surprising that presidential spokesman, Garba Shehu, is silent over last weekend’s attack by gunmen at Igangan, in the Ibarapa North Local Government Area of Oyo State.

Media Aide to Adams, Kehinde Aderemi, stated this on Wednesday in an exclusive interview with The PUNCH.

The PUNCH had earlier reported that no fewer than 17 indigenes of Igangan were reportedly shot dead when the hoodlums invaded the town on motorcycles around 11pm on Saturday and started killing and destroying property, which continued until around 3am on Sunday.

The palace of the Asigangan of Igangan, Oba Lasisis Adeoye, was also razed by the gunmen, but the monarch escaped because he did not sleep in the palace.

Commissioner of Police in the state, Ngozi Onadeko, had condemned the attack and urged residents to remain calm and trust the police while promising that those behind the attack would be apprehended.

Reacting to the silence of the Presidency on the attack which has been widely condemned, Aderemi said, “It is very clear that the Federal Government is not even ready to issue any statement regarding the attack. The Federal Government would be the first to condemn such an attack if it had happened in the North but Garba Shehu as he is, we know where he is coming from, so, we are not expecting any miracle from him. As Aare said in a previous statement, those that perpetrated the act are beating the drum of war in the country.”

“Those killed in Igangan town have their families and friends, there is blood flowing in their veins and in a moment their lives were cut short by killer herdsmen and bandits in their home,” Adams had alleged.

Last weekend’s attack has been described as a reprisal by killer herders in reaction to their eviction from Ibarapaland following an ultimatum given to them by Yoruba rights activist, Sunday Adeyemo also known as Sunday Igboho.

Igboho and his supporters had stormed the rustic town in January 2021 and issued an eviction notice to suspected criminal herders residing in Igangan.

The natives subsequently burnt the houses, cars, palace and possessions of one Seriki Salihu Abdukadir, who was said to be the leader of the herdsmen in the town. The villagers had accused Abdukadir of complicity in the serial kidnapping, rape, and killing of farmers in the area but the Seriki, who has since moved to Kwara State, denied the allegations.

Also, earlier in the year, some members of the Oodua Peoples Congress arrested one alleged notorious warlord in the Ayete area, close to Igangan, also in Ibarapaland. Wakili was subsequently handed over to the Nigeria Police Force but the Oyo State Police Command accused the OPC operatives of arson and murder during their arrest of Wakili and his cohorts. The suspects have remained in police custody while the matter is in court.

The South-West Governors Forum last weekend vowed to defend the region against any attack by rampaging marauders. Chairman of the Forum and Governor of Ondo State, Rotimi Akeredolu, condemned the Igangan attack, describing it as “horrendous, callous and highly provocative.”