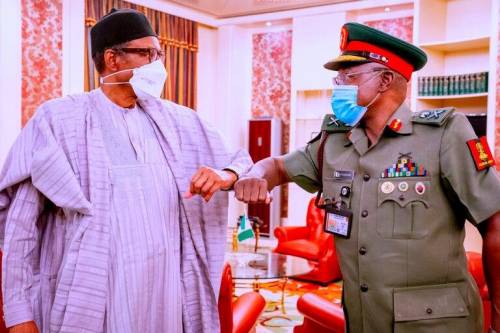 President Muhammadu Buhari explained that he appointed Major General Farouk Yahaya as the Chief of Army Staff because he had led a war and was used to the frontlines.

Buhari justified his choice of Yahaya though his appointment will force over 20 Major-Generals to retire.

The President said the soldiers in the frontlines also know him and that he is used to them.

He stated this on Thursday in an interview on Arise News Television in Abuja.

Buhari said, “Do you know you can’t be the Chief of Army Staff because of seniority? You have somebody who has been on the frontlines. He fought there. They know him. I tell you the truth. I don’t know them (the other generals).”

Buhari appointed Yahaya on May 27 and the Sokoto-born general returned from the North-East where he was hitherto serving as the Theatre Commander of Operation Hadin Kai, the Boko Haram counterinsurgency operation.

Back to Top
Close
X
How We Neutralised ISWAP Attack On Borno Community, Killed Six Terrorists—Nigerian Army…Saharahttp://saharareporters.com/2021/06/10/how-we-neutralised-iswap-attack-borno-community-killed-six-terrorists%E2%80%94nigerian-army No fewer than six te…

Why I Appointed Maj. Gen. Farouk Yahaya As Chief Of Army Staff —Buhari