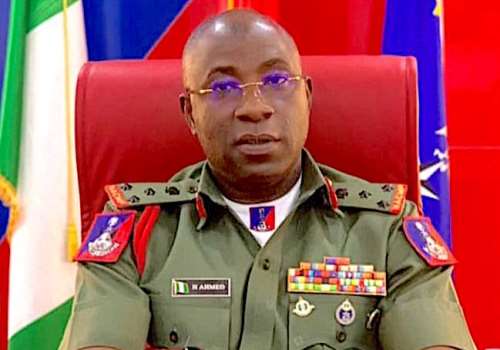 The Nigerian Army has confirmed the murder of Major General Hassan Ahmed, a former Provost Marshal.

DAILY POST broke the story Thursday night, a few hours after the mishap.

The siblings and the deceased’s driver, Sergeant Bukar were returning to the nation’s capital from Okene when they were attacked.

DAILY POST further gathered that General Ahmed made the trip without his guards.

The spokesman said the incident occurred when the top officer’s vehicle, “was attacked by gunmen while transiting along Lokoja – Abuja”.

Nwachukwu disclosed that an Army delegation, led by the Chief of Policy and Plans, Major General Anthony Omozoje, had visited the widow and other members of the bereaved family.

“The remains of the deceased senior officer will be accorded a befitting burial at the Lungi Barracks Cemetery on Friday, 16 July 2021 by 10 a.m.”, the statement added.

We this territory natives who owns the land have defeated 1804 fulani caliphate with its emirates the way we defeated 1914 amalgamation of British bandits in 1960. We’re now the government over our God given native lands in which the six geopolitical zones are sovereign states- Biafra Republic of south east, Niger Delta Republic of south south, Oduduwa Republic of south west, North East Republic, North West Republic, Midwest Republic. Hausa people, Kanuris etc. of the north will be traditional rulers, religious leaders, political office holders etc. over their God given native lands under their sovereign states. Southern natives will have democratic capacity under their sovereign states to fix their lands, economies.

Defeated thugs of fulani caliphate called military, police etc. which know nothing about Revolutionary Warfare, must be eliminated on every inch of the six sovereign states. Defeated fulani criminals must find their way back to Guinea- dead or alive in this 2021 the way defeated British bandits find their way back to Britain in 1960.