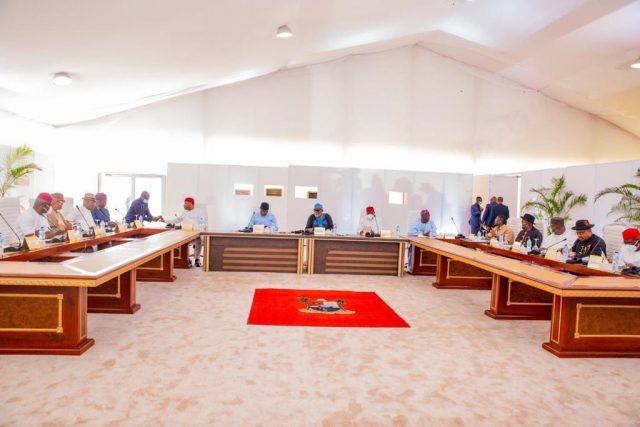 President of the country in 2023 to come from the Southern part of the country, there had been a preponderance of opinions across the divide that the Southeast zone should be allowed and supported to produce Nigeria President in 2023 in the interest of fairness, equity and the spirit of oneness.

It is not surprising that the Southern Governors’ position on the issue has been trailed with mixed reactions and feelings. While the Pentecostal Fellowship of Nigeria, different groups and political leaders across the divide including some Northern governors like Governor Samuel Ortom of Benue State, Mallam Nasir El-Rufai of Kaduna State, Prof. Babagana Zulum of Borno State, Ibrahim Ganduje of Kano, Aminu Masari of Katsina and their Nasarawa counterpart, Abdullahi Sule have openly declared their unflinching support for 2023 President of Southern extraction, the Northern Elders Forum (NEF), former governor of Zamfara State, Senator Sani Ahmed (Yerima) and Kogi State Governor, Yahaya Bello have faulted the appeal, stressing that Nigeria Presidency is a democratic office and not a rotational position. They further claimed that the demand of the Southern Governors in 2023 is unconstitutional and unacceptable.

According to the Director of Publicity and Advocacy of the NEF, Dr. Hakeem Baba-Ahmed, the North cannot be threatened, intimidated or blackmailed out of the 2023 presidency by the Southern Governors’ unconstitutional request to be allowed to produce the next president of the country.

Even before now, Northerners, especially Governor Bello, who are opposed to the South’s quest to produce President of the country in 2023 have argued that merit should be the basis for such quest, not emotional appeal as exhibited by the Southerner governors.

One thing that is clear is that the Southern Governors’ position on the 2023 presidency is legitimate and allowed in a democracy. It is not an abomination or aberration. The Governors have the constitutional right to make such requests. An appeal or request of such by the Southern Governors who are the leaders in their respective states and critical stakeholders in the project called Nigeria cannot and should not be termed or assumed as intimidation, threat or blackmail by any reasonable person, not even the NEF, Sani Ahmed, Governor Bello and other Northern irredentists opposed to it.

The Southern Governors are representatives and leaders of their people. Their demand, appeal or request that the 2023 presidency should be zoned to the South is not different from the views of their people and majority altruistic and patriotic Northerners, including governors that have openly supported the idea in the overall interest of the country’s unity and brotherhood.

On the constitutionality of the request, NEF and those opposed to the quest should be reminded that it is constitutional. Besides everything should not be constitutional, especially in politics before people abide by it. Consensus, adoption, affirmation and dialogue are parts and parcels of politics and democratic practice. It is not alien.

Even when the constitution becomes an obstacle in such circumstances, the doctrine of necessity, which is constitutional could be adopted to salvage the situation. We have witnessed it at the peak of late President Umaru Musa Yar Adua’s health saga that nearly grounded the country’s democracy. It was the doctrine of necessity that saved the country’s democracy from collapsing then. With the inclusion of the Federal Character principles in Nigeria’s constitution, it is not in doubt that the framers recognize the need for equity and fairness in the distribution of public offices in the country.

It is to ensure fairness, equity and a sense of belonging that many states in the country have adopted conventional zoning of governorship seats in their states without recourse to the constitution. It has worked and still working for them. Such has reduced acrimony, rancour and political brigandage in governorship elections in such states over the years.

It amounts to mischief, selfishness and hypocrisy for one to canvass for zoning of governorship seat among the three Senatorial zones in the state and oppose such zoning of the presidential seat among the six geopolitical zones in the country of which four have produced both Presidents and their Vices, leaving others to their political fate since 1999.

Those who are opposed to the South, particularly Southeast producing Buhari’s successor are not sincere and fair. The likes of Gov. Bello and Senator Ahmed are being driven by their 2023 presidential ambitions and not a sense of equity. They know the truth, but are trying to live in self-denial and pretence. There is no better time to address the political marginalisation of the people of the South, especially the Southeast region than in 2023 by supporting them to produce the President. Their own should not be different, because apart from paying their dues in the project called Nigeria, they have endured and experienced too much political oppression and alienation like no other zone in power-sharing.

Even if merit should be the basis for which zone should produce the President of Nigeria in 2023, the Southeast region has overqualified and merited personalities with enviable feats and outstanding track records. The North that has dominantly and politically lord over the South, since the independence of the country is not much endowed humanly and materially than the South.

From the First Republic till date, that the North has dominated the country’s political space especially as it concerns the Presidency, what they have offered Nigerians are not better than what the South had offered and can still offer if given opportunity.

Lest we may have forgotten. In the first Republic, Alhaji Abubakar Tafewa Balewa, who was made Prime minister was not the most qualified in the North, talkless of the South, where the likes of Dr. Nnamdi Azikiwe and Chief Obafemi Awolowo hailed from. Balewa’s emergence as a result of the united conspiracy by some leaders in collaboration with the British, who colonized the country.

This same united conspiracy of the political elite was what made Alhaji Shehu Shagari, a grade 2 teacher, the Presidential candidate of the National Party of Nigeria (NPN) and later elected President of the country, against intellectuals from the North such as Maitama Sule, Alhaji Ibrahim Tahir and others, who were NPN presidential aspirants.

With the return of democracy in 1999, nothing changed. The Southwest zone fought to be supported to produce on the sentiment of the aftermath of the annulled June 12, 1993, won by their son, MKO Abiola who later died in prison. That was why Chief Olusegun Obasanjo who was in prison in Yola then and knew nothing about the formation of the Peoples Democratic Party was hurriedly released, packaged and imposed on the founding members of the PDP by some retired military personnel in collaboration with some political elites as the party’s presidential candidate against the highly favoured ex-vice president and a founding father of the PDP, now late Alex Ekwueme.

Obasanjo, whose highest qualification then was that he was a former military Head of State, was voted into office as President in 1999 against the highly cerebral and renowned technocrat and economist, Chief Olu Falae. There was merit in this circumstance if not that the cabal and their united conspiracy were at work?

In 2015, President Goodluck Jonathan of the Peoples Democratic Party (PDP) could be said to be more qualified than President Muhammadu Buhari in all ramifications, but with the sentiment of the North that it was their turn to produce the President coupled with the same united conspiracy of some political elites who have been in the system, Nigerians especially the Northerners who are even PDP faithful voted for Buhari’s Presidency against that of the incumbent Jonathan.

With the above historical narrative, it is obvious that since independence till date, Nigerians by omission or commission have not made choices of their presidents at polling units on merit or the most qualified. Such choices have always been more on the basis of party consideration, zone, circumstances and expediency than meritocracy or qualifications.

With this, anybody or group that is opposed to the Southern Governors’ quest for the 2023 Presidency to be zoned to South and the office to be rotational, citing merit is living in self-delusion. This is because Southern Nigeria is blessed with abundant human resources across the three geopolitical zones. They are not lacking quality and qualified people.

Deploying the puerile argument that the 2023 presidency should be about merit is not enough to scare the people of Southern Nigeria away or intimidate them into submission.

The political elites across the divide know how they have been doing it since the First Republic till date; they should replicate it in the South, particularly in the Southeast zone in 2023 by picking a Presidential candidate from the zone and support him to be President. They did it for the Northeast, Northwest, Southsouth and Southwest and it is the turn of the Southeast in 2023.

The Northerners if they truly believe in one Nigeria should not wait for the South to micro-zone the 2023 presidency to the Southeast zone before they support the move. They should support the quest now and be involved in making choices of who becomes the President of the country in 2023, the way and manner they have been doing it before. Nothing has changed. It is the same Nigerians. The same politicians and political configuration that has always produced Presidents in Nigeria.

This news originally appeared in The Guardian.

Back to Top
Close
X
Copa load of this: Lionel Messi gets one over on Cristiano Ronaldo by breaking Instagram record with…UncategorizedRT A week after finally winning his first major silverware with the Argentina national team, Barcelona superstar Lionel Messi has now smashed a record…

X
Contending issues in the PIBUncategorizedThis Day There is need for genuine conversation on this critical bill Like the Electoral Act, certain provisions in the Petroleum Industry Bill (PIB) …