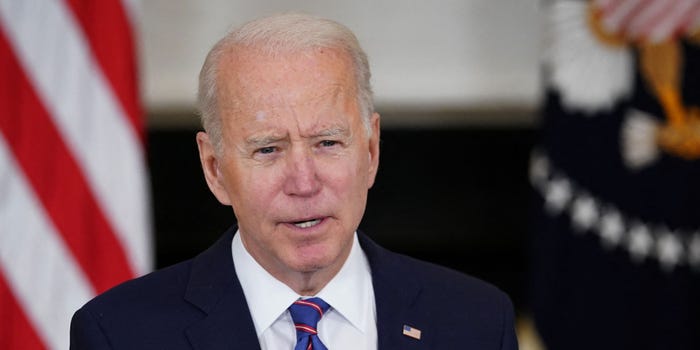 In an about-face on his own condemnation of social media misinformation about COVID-19, President Biden on Monday said, “Facebook isn’t killing people” by hosting false claims.

Biden softened his stance after company executives pushed back on his Friday statement that Facebook is responsible for deaths caused by anti-vaccine sentiment.

Asked by a reporter, “On COVID misinformation, what is your message to platforms like Facebook?” Biden lashed out Friday.

But asked about those comments on Monday, he instead told reporters that he had just read an article claiming that most COVID-19 misinformation comes from 12 people — apparently referring to a report by the Center for Countering Digital Hate that identified Robert F. Kennedy Jr. as the most famous member of the “disinformation dozen.”

“I mean precisely what I said,” Biden said Monday, before contradicting his prior remark holding Facebook responsible for deaths.

Biden added: “My hope is that Facebook instead of taking it personally — that somehow I’m saying Facebook is killing people — that they would do something about the misinformation, the outrageous informant misinformation about the vaccine. That’s what I meant.”

Biden also touted the stock market’s successful year — despite the fact that on Monday morning, the Dow Jones Industrial Average fell by about 900 points amid fear that vaccines may not head off the more contagious Delta variant of COVID-19 that is tearing through the UK and largely unvaccinated areas of Missouri and Arkansas.

“The stock market is higher than it has been in all of history … even down this month,” Biden said, adding: “I don’t look at the stock market as a means by which to judge the economy like my predecessor did. But he’d be talking to you every day for the last five months about how the stock market so high, higher than any time in history.”

Biden’s dustup with Facebook came as the White House pressed social media companies to do more to censor anti-vaccine posts. More than 68 percent of US adults have had at least one COVID-19 vaccine dose, according to CDC data, dramatically lowering infections in most parts of the country. But some regions have notably lower vaccination rates.

Back to Top
Close
X
‘My life is in danger. Come save my life.’ Haitian president’s desperate final pleas…Popular URLBy JACQUELINE CHARLES PORT-AU-PRINCE, HAITI The call came at 1:34 a.m. Haitian President Jovenel Moïse, who was on the other line, was in difficulty, …

Biden walks it back: I didn't mean to say that Facebook is killing people

X
What is Pegasus and what has WhatsApp got to do with it?…Popular URLSo what is Pegasus?Pegasus is a spyware that was developed by an Israeli "cyber weapons" company named NSO Group.  The first time it hit the news…