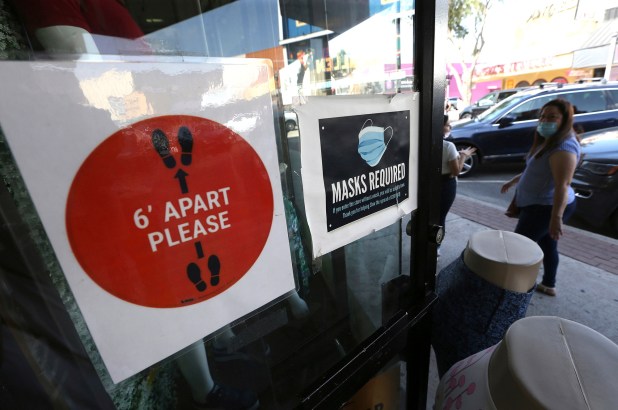 The Dow plummeted more than 800 points on fears that the spread of the coronavirus’ Delta variant could disrupt the global economic recovery, even as investors weighed fresh concerns over inflation and oil prices.

In mid-morning trades Monday, the Dow Jones industrial average dropped 2.4 percent, or 830 points, to 33,858, while the S&P 500 and Nasdaq slumped 1.7 percent and 1.2 percent, respectively. The declines mark a sharp reversal from last week when the Dow briefly hit a new high above 35,000.

“The fears over the Delta variant have investors concerned about reopening momentum stalling out,” managing director at TJM investments Tim Anderson told The Post. “We’ve had a strong performance in the first half of the year and some investors are looking to lock that in.”

Over the last week, both new cases and hospitalization rates have climbed as the ultra-contagious Delta variant becomes the dominant strain. While cases are primarily spreading among populations with low vaccination rates, even states with a majority of residents vaccinated like California are implementing new restrictions.

Travel stocks are bearing the brunt of today’s losses. Delta, United and American Airlines have all lost nearly 4 percent.

Nagging concerns of skyrocketing inflation are also weighing on investors. Inflation rates are at their highest in 13 years, according to consumer price index data from June. A report released Friday from the University of Michigan shows consumers believe inflation will continue and even escalate — they estimate prices on goods will climb 4.8 percent over the next year.

“When markets are hit with concerns about inflation, coronavirus, and even an impasse on infrastructure, the market will shoot first and ask questions later,” Anderson added.

Anderson noted the Russell Index, filled with uber growth stocks, is getting hit particularly hard as uncertainty roils markets but suggested it could make for an interesting buying opportunity later this week.

X
30 killed, several injured as bus crashes in Pakistan…UncategorizedThe Hindu  At least 30 people were killed, mostly labourers who were going to their hometown to celebrate Eid-ul Azha, and over 40 others injured on M…