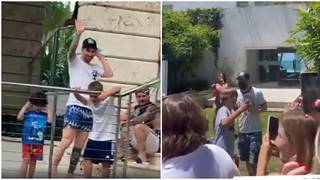 Football superstar Lionel Messi has opened up his temporary Florida home to greet adoring fans, who had been waiting outside the residence waiting for a glimpse of the six-time Ballon d’Or winner currently holidaying in the US.

The Argentine is fresh off his first-ever major tournament win with his country after a quartet of lost finals.

At the weekend, his photo with the Copa America trophy won in Brazil surpassed a selfie of Cristiano Ronaldo with compatriot Diego Maradona after the latter’s passing, and broke the record for the most ‘liked’ sporting snap of all time on close to 21 million likes.

Mobbed in a restaurant in Miami on Thursday, the 34-year-old and his family are currently enjoying a vacation in the Sunshine State’s largest city, where he owns a luxury condo in the Porsche Design Tower building.

This time round, though, the Messis are reportedly staying in a five-bedroom mansion in Key Biscayne, which is listed to rent for $200,000 a month and is owned by an Argentine businessman, Sergio Roitberg.

The locals queuing outside the property to get a glimpse of the GOAT candidate, they finally had their dreams come true when the iconic number 10 reportedly opened up its gate to meet them.

In clips posted online, Mess can be seen waiting with his wife Antonela following him.

One boy heads straight up for a selfie, but the crowd are generally well-behaved and give their hero his space as they take photos from a distance to one day show their grandkids.

Other clips show Messi from behind the fence but still greeting fans to sign autographs and waving at them.