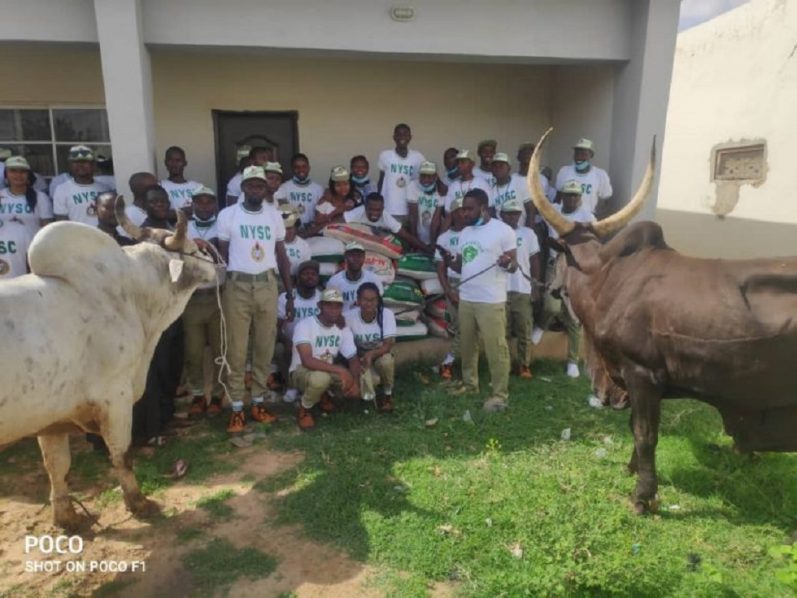 Mr. Alex Obemeata, NYSC’s spokesperson in Katsina, who disclosed this in a statement on Tuesday, said the President’s gesture was delivered to them when they visited him in Daura to celebrate the Eid-El-Kabir.

“It was another joyous Sallah day for the corps members serving in Daura, the country home of Mr President, as he was at home for the 2021 Sallah celebration.

“Usually, when Mr President is at home for Sallah celebration, corps members go to his house to welcome him and wish him ‘Happy Sallah’.

“In like manner, on July 20, 2021, the corps members in Daura were at the President’s house for the Sallah wishes, and it was a celebration of the century.

“They were given two cows, 20 bags of rice, and N1 million.” The NYSC spokesperson disclosed.

He said that the President commended the NYSC members and urged them to be good ambassadors of their country and committed towards the development of Nigeria.

According to Obemeata, the State Coordinator, Alhaji Ahidjo Yahaya, on behalf of the NYSC Director-General, Brig-Gen Shuaibu Ibrahim, thanked the President for the gesture.

He said that the action of President Buhari would encourage Nigerians to believe in the spirit of national unity and integration, which the NYSC stood for and preached.

Ahidjo prayed for God’s protection and good health for the President.

This news originally appeared in The Guardian.

Back to Top
Close
X
In 2023, punish any Yoruba politician who remains silent on Igboho’s travails —Omokri…More NewsRipples Nigeria Former aide to ex-President Goodluck Jonathan, Reno Omokri, has called on Yoruba people to mark out and punish any politician from the…

X
Remains of drug war victims exhumed after lease on graves expired…More NewsRodzon Enriquez’s skeletal remains are pulled out of a coffin-sized tomb in Manila and placed in a body bag. Five years after the 21-year-old was kill…