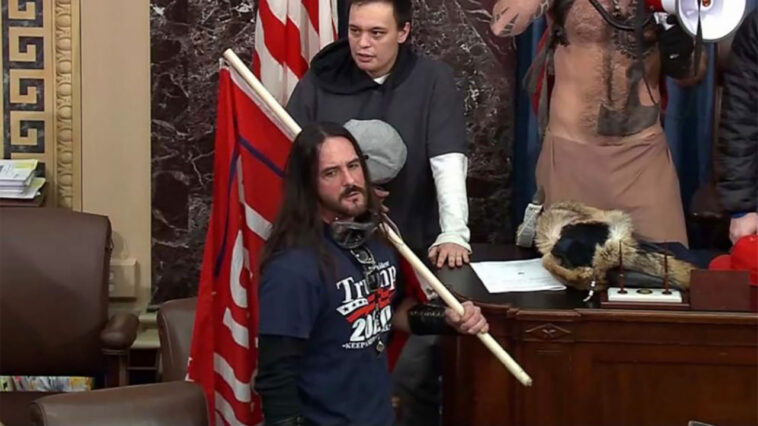 The US Capitol rioter who breached the US Senate chamber on January 6 carrying a Trump campaign flag and posed for selfies, was sentenced Monday to eight months behind bars, the first prison sentence in the Capitol insurrection.

Paul Allard Hodgkins, 38, pleaded guilty on June 2 to obstruction of an official proceeding, while Congress was in the process of formally certifying Joe Biden’s election last November as US president when supporters of former President Donald Trump rampaged through the building.

At a sentencing hearing in Washington, DC, on Monday, prosecutor Mona Sedky told US District Judge Randolph Moss that Hodgkins, a resident of Tampa, Florida, donned goggles before entering the Senate chamber during the riot and “proudly posed for selfies” which he texted to friends.

Sedky acknowledged that Hodgkins did not destroy any property “and he did not injure anyone”.

Hodgkins apologized and said he was ashamed of his actions.

Speaking calmly from a prepared text, he described being caught up in the euphoria as he walked down Washington’s most famous avenue, then followed a crowd of hundreds into the Capitol.

“If I had any idea that the protest … would escalate (the way) it did … I would never have ventured farther than the sidewalk of Pennsylvania Avenue,” Hodgkins told the judge. He added: “This was a foolish decision on my part.”

Prosecutors had asked for Hodgkins to serve 18 months behind bars, saying in a recent filing that he, “like each rioter, contributed to the collective threat to democracy” by forcing legislators to temporarily abandon their certification of Joe Biden’s 2020 election victory over President Donald Trump and to scramble for shelter from incoming mobs.

In pronouncing the sentence, Judge Randolph Moss said that Hodgkins had played a role, if not as significant as others, in one of the worst episodes in American history. Still, he chose to give Hodgkins a year less in prison.

“That was not, by any stretch of the imagination, a protest,” Moss said. “It was … an assault on democracy.” He added: “It left a stain that will remain on us … on the country for years to come.”

Video footage shows Hodgkins wearing a Trump 2020 T-shirt, the flag flung over his shoulder and eye goggles around his neck, inside the Senate. He took a selfie with a self-described shaman in a horned helmet and…

Back to Top
Close
X
Government used Israeli Firm NSO’s Spyware to target Activists, Journalists: Investigation…NewswireHuffpost An Israeli surveillance firm’s spyware has been used by oppressive regimes to carry out human rights violations on a global scale, according …