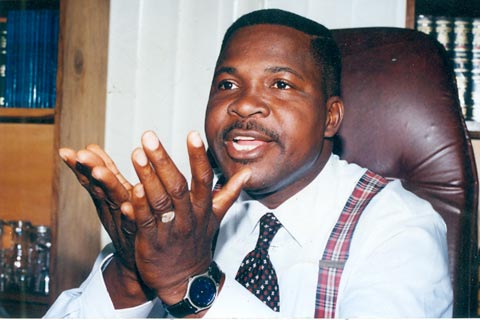 He noted that the Nigerian government has shown a tendency to maintain two separate laws for two regions.

Ozekhome in a statement on Tuesday said Buhari’s administration abandoned AK-47-wielding armed bandits, Boko Haram terrorists, and other deadly insurgents, including ransom-taking kidnappers, only to be running after Igboho and Kanu.

The statement read, “The Federal government appears supersonically effective and efficacious when it comes to arresting and repatriating dissenters and challengers of its morbid nepotic and sectionalistic government.

“The same government paradoxically appears abysmally weak and hopelessly helpless when it comes to fighting AK-47-wielding armed bandits, Boko Haram and other deadly insurgents, including ransom-taking kidnappers who are almost kidnapping the very heart and soul of Nigeria on a daily basis. The Nigerian Nation appears captured by non-state actors.”

He noted that the Nigerian government has shown a tendency to maintain two separate laws for two regions.

He continued, “To me, this lopsided template demonstrates acute intolerance and ambivalence. It shows self-contradiction. It shows an inclination towards enforcing laws against certain people, against certain classes of people, while at the same time turning away the other eye in enforcing laws against the other preferred and pampered set of people.

“The same government that is suddenly effective in the case of Nnamdi Kanu and Sunday Igboho has never been able to capture kidnappers, armed bandits, and Boko Haram that are daily ravaging us, turning Nigeria into a sprawling field of human carnage. They take ransom. Innocent schoolchildren are paid for. Where is the same government when kidnappers are demanding that the parents of kidnapped children should now be feeding them in their kidnap dens?

“But, it suddenly becomes effective and audacious when it comes to arresting and even ambushing and attacking in their very homes, self-determination activists and crusaders. I am not impressed with this at all. The government may thump its chest for temporary gains. But, does this solve the problem? See this as merely pursuing butterflies while the house is on fire. Recall history: Major Kaduna Nzeogwu Chukwuma. Isaac Adaka Boro, Ken Saro-Wiwa. The Ogoni 5. Are we out of the woods? I do not think so. Or, do you?”

X
THE CABLE EXCLUSIVE: UK reviews policy for Nigerian asylum seekers to ‘favour’ L…RifsThe UK Visas and Immigration (UKVI) has reviewed guidelines for its decision makers on how to consider and grant asylum applications made by persons f…