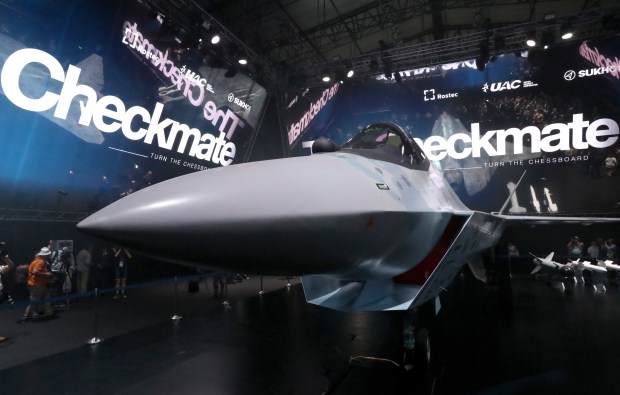 RUSSIA has unveiled the prototype of a new stealth fighter jet called Checkmate — while making a snide dig at the Royal Navy.

A delighted-looking Vladimir Putin was seen at an airshow inspecting the warplane that can fly at twice the speed of sound plus use artificial intelligence capability to hunt out targets.

In a promotional video released ahead of its unveiling, the new stealth jet can be seen rolled out under a tarpaulin — along with a bizarre ad asking: “Wanna see me naked?”

Another ad teasing the fifth-generation Sukhoi, sarcastically shows the Royal Navy’s HMS Defender warship in the jet’s sights with the caption: “See You.”

The British destroyer was involved in a confrontation with Russia’s military as it sailed past Crimea last month.

Moscow said one of its warships fired warning shots and a warplane dropped bombs in the ship’s path to force her out of an area near the Crimean Peninsula, which Russia annexed in 2014.

At the event, a proud but poker-faced Putin said: “Russian aviation has great potential for development.”

This is 21st century world of relations based on Mutual Principles.

Back to Top
Close
X
INVESTIGATION: How Rivers residents are ‘dying slowly’ as illegal oil refining worsens soot pollutio…RifsThe Cable Nmesoma Esther and her siblings were lost in their world as they roamed their three-bedroom flat. With little to worry about, they giggled a…