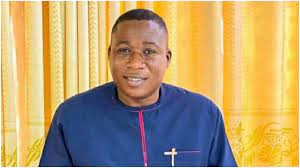 “Buhari will command from Abuja, soldiers that will come with Armour Tank will surpass those fighting Boko Haram war in the north… They will call me a killer”

Two years ago, Sunday Adeyemo, popularly known as Sunday Igboho in one of his interviews, predicted that Buhari will fight him with force.

After the report of the arrest of the campaigner for the Yoruba Nation in Cotonou, Benin Republic, the four minutes 19 seconds interview with BBC Yoruba went viral on social media.

In a video posted on June 20th, 2019, seen by DAILY POST, Sunday Igboho said Yoruba must be united if they want to fight the killer herdsmen.

He promised to go after the herdsmen if elders and kings in Yorubaland sign an agreement with him.

“They will call us names if we start to use what(voodoo) we inherited from our fathers.

“If someone wise up today or Sunday Igboho raised – Buhari will command from Abuja, soldiers that will come with Armour Tank will surpass those fighting Boko Haram war in the north.

“They don’t see themselves in the north; they will mean our action if we start our activities here.”

He said the fight against killer herdsmen is beyond voodoo but, according to him, requires intelligence.

Igboho was arrested on Monday by security operatives in an airport in a neighbouring country, Benin Republic, while trying to flee to Germany.

Igboho was declared wanted after the Department of State Services (DSS) operation at his Ibadan residence on July 1.

He was asked to turn himself in to the nearest security agency. But, thereafter, the secessionist went underground.

Igboho stayed away from the July 3 Yoruba Nation rally he promoted and later called off due to the assault on his home.

FLASHBACK: Buhari will command forces more than those fighting Boko Haram against me – Sunday Igboho