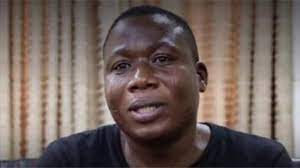 Will Sunday Igboho, arrested on Monday night at Benin Republic’s Cotonou airport be extradited to Nigeria?

Diplomatic and legal intrigues have opened over this question, it was gathered yesterday.

Igboho (real name Sunday Adeyemo), was declared wanted and put on International police (INTERPOL) watch-list by the Department of State Service (DSS) in July 1 after a raid on his Ibadan residence by “a joint security team.”

Igboho escaped, but two of his guards were killed.

Thirteen others, including a woman, were arrested at his home and whisked to Abuja.

Apart from guns and charms,  Igboho’s international passport and his German resident permit were also recovered.

However, Igboho was arrested on Monday night in the neighbouring country along with his German wife, Mrs Ropo Adeyemo while attempting to travel to Europe.

It was learnt that the involvement of his wife in the arrest got the German government intervened in the matter.

Igboho’s lawyers, led by Yomi Aliu (SAN), have moved to Benin Republic where they have contracted Beninese lawyers in readiness for a legal battle to prevent the agitator’s extradition to Nigeria.

The Beninese government, it was learnt, is willing to hand Igboho over to Nigeria because of the warm diplomatic relationship between the two countries and to facilitate free trade along the border with Nigeria.

A top source said: “There has been suspense over extradition of Igboho because of diplomatic intrigues. The involvement of a German citizen has added a new dimension to the arrest of Igboho. Germany is insisting on a fair procedure. Most Western nations are backing Germany.

“If Germany has its way, Igboho’s extradition has to be subjected to a thorough legal process. It is claiming that Igboho must undergo a free and transparent judicial process in Benin Republic. The Federal Government is insisting that the INTERPOL statute must be respected and the suspect should be handed over immediately.

Based on his watch-list, the Federal Government wanted Igboho extradited to Nigeria in line with the laws governing INTERPOL.

The INTERPOL is made up of 194 countries which are sharing data related to police investigations.

Both Nigeria and Benin Republic are member countries of INTERPOL.

“Igboho’s lawyer Aliu and some Beninese lawyers would join in the legal and diplomatic matters, including the Extradition Treaty of 1984 by Togo, Nigeria, Ghana and Republic of Benin.

“Benin Republic, a former French colony, is weighing options to either bow to pressure from Germany or accede to Nigeria’s request by complying with INTERPOL protocols.

“When it comes to the economy of a country, no one will joke with it. You can appreciate the diplomatic web on Igboho. Benin Republic is trying to manage the situation.”

Aliu in a statement said:  ”The Extradition Treaty of 1984 between Togo, Nigeria, Ghana and Republic of Benin excluded political fugitives. It also states that where the fugitive will not get justice because of discrimination and/or undue delay in prosecution the host country should not release the fugitive.

“Now, Article 20 of African Charter on Human and Peoples Rights to which the four countries are signatories made agitation for self-determination a fundamental right to be protected by all countries. This made Chief Sunday Adeyemo a political offender who cannot be deported and/or extradited by the good people of the Republic of Benin for any reason.”

Contrary to some claims, Aliu confirmed to BBC Yoruba that Igboho has not been released.

He said: “It is a lie that Igboho has been released. The claim is farther from the truth.”

It was also learnt that Igboho’s conversation on telephone gave his whereabouts away.

“You know that he has been under watch and he is a suspect who talks too much.

“These telephone clues were used to trail him and he was intercepted in Cotonou.”

This story first appeared in The Nation

We don’t make noise. We give our words and follow it up with whatever it takes.

Sunday Igboho must get to his destination as planned or Benin Republic will no longer exist on the surface of the earth.

It is either Benin Republic allow Sunday Igboho get to his destination as planned or prepare for bloody engagement against we Disintegrated Republics of this territory natives.

Back to Top
Close
X
Igboho wept like a child when I spoke with him on phone –Lawyer…HeadlinesLead counsel for arrested Yoruba Nation activist Sunday Adeyemo aka Sunday Igboho, has described as inhuman, the treatment his client was being subjec…

X
How travel agent lured Igboho, wife into Interpol’s net at Cotonou airport (Open…HeadlinesPunch By Kayode Oyero Facts have emerged on how a travel agent was used to lure Yoruba nation activist, Sunday Adeyemo, aka Sunday Igboho; and his wif…