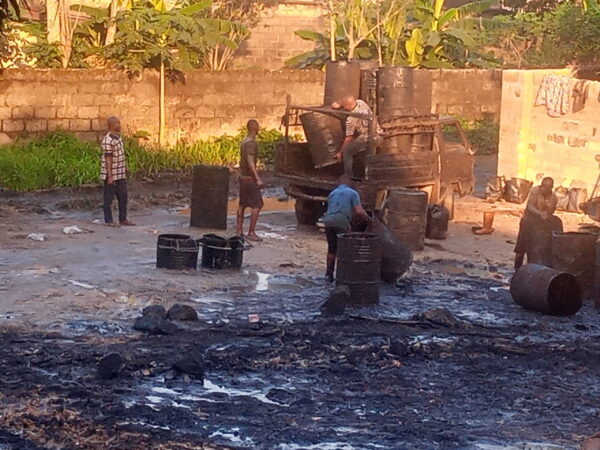 Nmesoma Esther and her siblings were lost in their world as they roamed their three-bedroom flat. With little to worry about, they giggled at intervals and bounced around with reckless abandon. Esther was happy to enjoy the evening hours before having to face a familiar demon at night.

The nine-year-old girl suffers respiratory distress syndrome (RDS) — a breathing disorder among children which causes insufficient surfactant in the lungs.

Every night, Esther endures pain and discomfort due to her inability to breathe well. But her hope of overcoming the condition is continually dampened by the relentless activities of the artisanal refiners who operate behind her house every day.

In 2017, her family relocated to Ohanachiom street, Obigbo west in Oyigbo LGA of Rivers. Since their arrival at the new environment renowned for heavy pollution, her condition has worsened.

“My chest used to be heavy whenever I try to breathe. I don’t also sleep well at night because I don’t breathe well,” she said, wearing a defeated look.

Daily, Esther watches as soot filters through the windows and falls on the ceiling fans, curtains, TV, chairs, and furniture. Nothing in the house is spared.

Esther’s situation depicts a state of helplessness. But she’s not alone.

“The soot issue has been a hell of an experience for us. We’re prone to catarrh always and we sneeze a lot. Most times, when you blow your nose, you’ll notice everything is black,” he said.

Soot is the common term for a type of particle pollution called PM 2.5 — particulate matter with diameters that are 2.5 micrometers or less.

It is mostly formed as a result of the incomplete combustion of hydrocarbons, and due to its tiny size, it can penetrate the lungs and bloodstream easily.

According to the US Environmental Protection Agency (EPA), soot is one of the deadliest forms of air pollution.

In spite of its deadly nature, residents of Rivers have continued to grapple with it.

Following the outrage that trailed its prevalence in 2016, Nyesom Wike, the state governor, had commissioned a technical team in 2018 to investigate the factors causing soot pollution and how to tackle it.

According to the report published in 2019, a copy of which was obtained by TheCable, illegal bunkering and gas flaring topped the list of activities causing soot pollution in the state.

The report — citing a review of hospital records across the 23 LGAs in Rivers — also revealed that 22,077 persons who received treatment for soot-related conditions between 2014 and 2018 suffered respiratory ailments.

Ede, who led the technical team, told the TheCable that findings showed there was “30% increase in morbidity and mortality rates in Rivers state 16 months after the soot incident started in 2016”.

“We concluded that the soot is a source of the very harmful condition that is already killing people. We also looked at the results of laboratory analysis and projected possible rate of cancer occurrence among residents of Port Harcourt,” he said.

“And we were able to come up with information showing that thousands of people will come down with cancer annually as a result of soot.”

Back to Top
Close
X
How travel agent lured Igboho, wife into Interpol’s net at Cotonou airport (Open list) (0 submission…HeadlinesPunch By Kayode Oyero Facts have emerged on how a travel agent was used to lure Yoruba nation activist, Sunday Adeyemo, aka Sunday Igboho; and his wif…