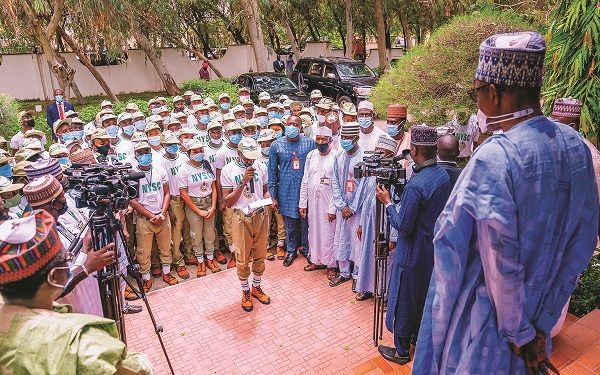 President Muhammadu Buhari has said only 2.5 per cent of the nation’s land mass is being used for agricultural purposes.

The President addressed reporters yesterday in his Daura country home in Katsina State after the eid prayers.

He urged more Nigerians to take up farming so that the nation’s vast agricultural potentials could be used to boost the economy.

A statement in Abuja by his Senior Special Assistant on Media and Publicity, Mallam Garba Shehu, said: “President Buhari, on Tuesday in Daura, Katsina State, urged more Nigerians to embrace farming, saying he was surprised to hear only 2.5 per cent of arable lands in the country is being cultivated.

“The President mandated security outfits to be more relentless in maintaining peace in the country, and ensure a more harmonious relationship with communities so that they can glean intelligence.

“He said the security situation had improved considerably over time in the Northeast and Southsouth, and efforts were being made in Northcentral and Northwest, assuring that more will be done to fish out those that had been troubling the peace of the nation and citizens.”

At the prayer ground, the Emir of Daura, Alhaji Faruk Umar Faruk, advised Nigerians to give the President more support to enable him improve security and boost the economy.

“Since the President came into power, we have seen some positive changes in the country.

“May God continue to strengthen the President with good health and courage to bring peace to the country. God will not allow Nigeria to see shame. God has been keeping the country and he will keep the country,” the Emir said.

This news originally appeared in The Nation.

‘Only 2.5% of Nigeria’s arable land cultivated’

X
FG's attempt to criminalise Igboho's case undemocratic, says Gani Adams…In the NewsBy Victoria EdemeAare Ona Kankanfo of Yorubaland, Gani Adams, has stated that the attempt by the Federal Government to criminalise the case of Yoruba …