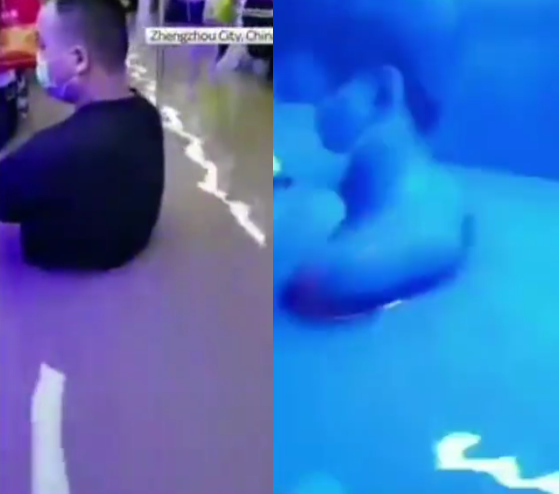 Passengers in the city of Zhengzhou had to be cling to ceiling handles inside flooded trains on Tuesday, when the rail system was inundated with water after an unusually heavy rainstorm.

They had to be rescued from the submerged train.

Unverified footage on social media appeared to show dead bodies on trains and in stations.

Terrifying mobile phone images show an underground train breached by water and helpless people standing up to their necks in brown water.

According to Aljazeera, 12 people were killed in the Metro, five more were injured and hundreds were rescued, officials said.

“The water reached my chest,” a survivor wrote on social media. “I was really scared, but the most terrifying thing was not the water, but the increasingly diminishing air supply in the carriage.”

According to South China Morning Post, at least 18 people have died. 12 people died when their subway train was hit with rapidly rising floodwaters on Tuesday night. Two people were also killed when a wall collapsed, as per the publication.

Entire neighbourhoods were left underwater and cars were swept away due to the flooding.

A historic Shaolin Temple just north of the city, a tourist spot known for its Buddisht monks and their martial arts skills, was also left submerged.

More than 10,000 residents of Henan province were moved to shelters, the official Xinhua News Agency reported.

Watch a video recorded in a flooded train below.

This story first appeared in LIB