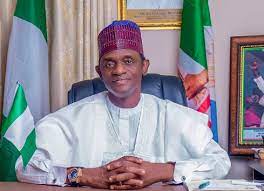 THE National Secretary of the All Progressives Congress, Senator John Akpanudoedehe, has said the party was recommending the consensus option for the election of party officials at all levels to reduce acrimony.

Akpanudoedehe said this in a telephone interview with The PUNCH, in Abuja, on Tuesday.

He was responding to agitations by some state chapters of the party to have what they described as a proper election.

Akpanudoedehe explained that the party leadership was dealing with the issue of integrating incoming and already established members as well as accommodating their various interests.

He said “We have more and more governors from opposition political parties, especially the PDP, who are coming to join us with thousands of their supporters; we have to make room for them.

“While doing so, we don’t want to take steps to push out those who are already within.

“Party administration is the most complex form of administration because you are dealing with diverse ethnicities, religious and cultural differences.

“For us, we have to take into consideration the need to accommodate everyone because the APC is a party for all Nigerians.

“We are encouraging states to adopt the consensus arrangement because it saves costs and reduces acrimony. That is why when you look at Article 20 of our constitution which talks about elections, the first thing there is for members to try reaching a consensus. When that fails, then you go to cast ballots.

“We are making sure we do not leave any room for the opposition, especially the Peoples Democractic Party to sponsor people to cause confusion in our midst.”

Speaking about plans for upcoming party congresses, the APC secretary gave a hint that party members who were not up to date in the payment of membership dues stood the risk of being excluded from the exercise altogether.

Back to Top
Close
X
Intrigues, suspense as APC plans national convention…Political LandscapeThe GuardianIntrigue,Suspense. These features becloud the much-awaited conduct of ward congresses by the ruling All Progressive Congress (APC). The ex…

X
2023: We’ll Pick Consensus Presidential Candidate – APC…Political LandscapeDaily Trust The All Progressives Congress (APC) has said at the appropriate time, it will come up with a consensus and agreeable presidential candidat…