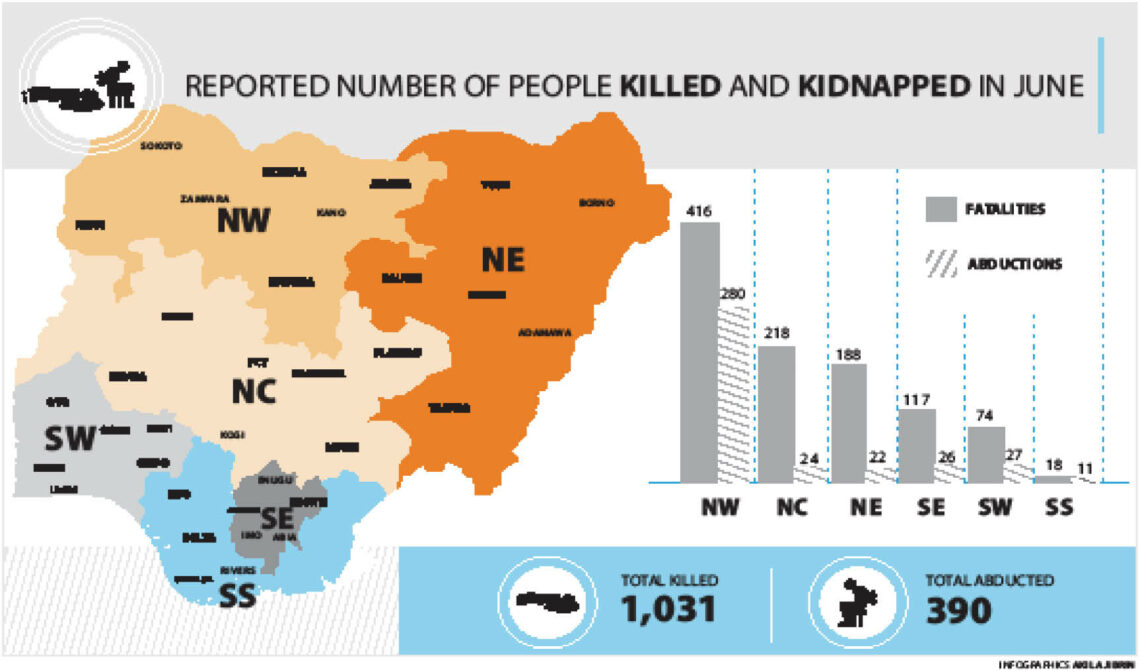 A report by an Abuja-based security risk management and intelligence consulting company, Beacon Consulting, said 390 others were abducted in 205 incidences recorded in 34 states of the country, within the same period.

Incidences of fatalities and kidnappings were recorded in 127 LGAs across 34 states of the federation with the exception of Bauchi and Gombe.

Majority of the cases were recorded in areas bedeviled by rural banditry.

According to the report, Boko Haram and related groups killed nine persons and abducted 20 others in four attacks recorded in the month. In the same period, attacks attributed to unknown gunmen, Eastern Security Network and the Indigenous Peoples of Biafra (IPOB) led to the killings of 18 persons in 12 attacks.

In the North West, Zamfara, where activities of bandits pauperized most rural dwellers, there were no abductions recorded, despite the loss of 275 persons in attacks. Neighbouring Kebbi State had 93 fatalities with 119 abductions. Similarly, Kaduna State recorded 26 deaths with 157 abductions.

While Katsina State recorded six deaths with three abductions, Sokoto State had 15 fatalities with zero abduction, Kano and Jigawa States recorded one death each with no abductions.

According to the report, the activities of non-state actors popularly referred to as bandits continued unabated in the North West and North Central despite ongoing security forces operations.

The report reads in part: “In the reporting period, the violent attacks on mainly rural communities were sustained in Kaduna, Katsina, Niger, Sokoto, and Zamfara states and mass abduction of students in schools in Kebbi, Kaduna, and Niger states, as well as families of staff, workers and patients at a medical institution in Kaduna State.

“We also monitored the setting up of illegal checkpoints, where these non-state actors abducted commuters and in one incident along the Kaduna – Kachia road, killed some of their victims for unknown reasons. We monitored increasing indications of the convergence between armed groups in the northeast and the ones in the North Central and North West.”

Also mentioned was the storming by bandits of Gadawaluwol village in Adamawa State in which one person was killed, as well as the killing by suspected herdsmen of a father and two sons in Galang Jauro village in Taraba State.

In the South East, according to the report, 117 fatalities were recorded with 26 kidnappings in 20 LGAs of Enugu, Anambra, Abia and Ebonyi States. The incidences in which the fatalities and kidnappings were recorded include armed attacks, armed clashes, social upheavals, violent crimes and airstrikes/bomb attacks.

Back to Top
Close
X
Forget about Covid, Monkeypox is another virus spreading across the U.S. Over 200 people in 27 state…RifsBy Nickie Louise Just when you think you’ve had enough of Covid-19, there is a new disease that’s beginning to spread across the country that should k…