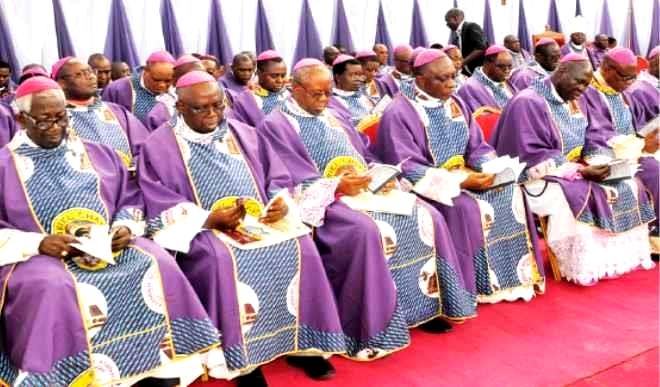 Catholic Bishops of Ibadan Ecclesiastical Province, yesterday, faulted the alleged selective administration of justice by the President Muhammadu Buhari-led government, saying this development has affected the country’s image in the international community.

The bishops, from Ibadan Archdiocese, Ilorin, Ondo, Oyo, Ekiti and Osogbo Dioceses, in a communiqué after their meeting at the Domus Pacis Pastoral Institute, Igoba in Akure, noted that the current waves of insecurity in the country are an indication that the Federal Government has failed to address the criminal elements wreaking havoc in the country.

The communiqué was signed by the province Chairman and Secretary, Rev. Gabriel Abegunrin and Rev. Akin Oyejola, respectively.

The bishops lamented that the country, under the present administration, has lost its soul and that the insecurity pervading the land, dwindling economy and others are all indices of a failed country, needing an urgent revival.

They also tackled the Presidency for attacking the Catholic Bishop of Sokoto Diocese, Matthew Kukah, for his revelations to the United States Congress on the state of things in the country, insisting that Kukah made patriotic and commendable points with verifiable data on the unlawful persecution of Nigerians.

The communiqué reads: “Nigeria, our country, seems to have lost its very soul because it is no longer a healthy entity. The good health of any nation consists in its capacity to offer its citizens a territory where they can feel at home, feel secure and enjoy the necessities of life.

“This, unfortunately, is no longer the case in our dear country, Nigeria, where, armed conflicts, armed robbery, kidnapping for ransom, insurgency, banditry and extrajudicial killing persist as the order of the day. When a nation loses its soul, its people lose the cohesive elements of human relationships. A nation that has lost its soul is characterised by inept, uncaring leadership which functions by selective allocation of posts, privileges and resources and by selective application of justice. It is characterised by leaders who, rather than care for the citizens of the country, simply exploit and denigrate them.”

On the presidency’s response to Bishop Kukah, the bishops said: “Bishop Kukah, in his patriotic and frank presentation called attention to some verifiable data and statistics about the Nigerian situation on that privileged international platform. He spoke for authentic Christians and Muslims who are under persecution. No doubt, he intended to solicit the support of that forum which many Nigerians believe holds the promise of some assistance and relief from our current national crises.

The club of criminals nickname CAN, PFN which fought for fulani criminals from Guinea to keep this territory natives under fulani rulership and lost must go down with defeated fulani caliphate called Nigeria.

We this territory natives who owns the land and are more than 99% population of this territory have defeated fulani caliphate called Nigeria in which the six geopolitical zones are sovereign states.

It is parliamentary system of governments with only a president, no prime minister.

Under such Electoral Structure, no native tribe of this territory is not represented in the governments.

Under fraudulent Electoral Structure of fulani caliphate called Nigeria, 90% of the governors, NASS members, traditional rulers etc. in the north are fulani criminals from Guinea. From Ahmadu Bello to Buhari are fulani criminals from Guinea. No Hausa man or woman is a governor, NASS member, traditional rulers etc. in the whole of Hausa lands. The same applies lands of Kanuri people etc.

STATE OF THE NATION: Catholic bishops tackle Buhari over selective administration of justice

X
‘Why Radio Biafra broadcaster Ekpa was sacked by IPOB’…Latest NewsThe Nation By Emma Elekwa, Onitsha The leader of the Indigenous People of Biafra (IPOB), Mazi Nnamdi Kanu, has relieved Mr. Simon Ekpa of his appointm…