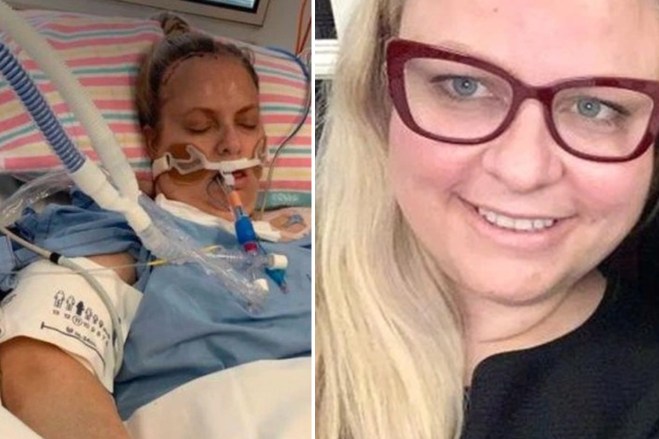 ALYSSA woke to find herself in a hospital bed, her two very emotional sisters by her side, all of them in utter disbelief that she had finally woken up.

When the Melbourne mum-of-two was told she had been in a coma for 14 days after having a stroke due to a “significant sensory reaction to the vaccine” her understandable reaction was “what the f**k?”

“I honestly had no idea… that was a fun conversation to wake up to,” Alyssa says, reliving the incredibly surreal moment to Kidspot.

“My little sister kept saying ‘I can’t believe we get to keep you’.”

Alyssa’s husband, mother and sisters had been told three times by the hospital that there was nothing else they could do.

“My sisters had been preparing about how to tell my daughters, who are only three and five.”

The 40-year-old had the AstraZeneca vaccine on May 17 due to having thyroid cancer two years ago.

Doctors believe the jab triggered an extremely rare reaction in Alyssa, and she urged others to get vaccinated despite her experience.

After suffering from headaches and nausea for 10 days, Alyssa flew to Newcastle, Australia, for a work conference where she had a seizure and was rushed to Cessnock hospital. There, she suffered another four seizures, and therefore was taken on to John Hunter hospital.

Alyssa, who has no pre-existing or underlying conditions, was immediately taken into surgery to have a craniotomy to stop the bleeding on her brain.

“They couldn’t get the pressure on the brain under control, so I was put into an induced coma.”

According to Alyssa’s medical records that Kidspot was given access to – she was diagnosed with ‘vaccine induced cerebral sinus thrombosis’.

“Doctors told me that the reaction I had to getting AstraZeneca was incredibly rare,” she explains.

Despite what she’s been through, Alyssa said she is still very much pro-vaccination and will be booked in for a Pfizer vaccination by the hospital before she is discharged.

Alyssa ended up being re-diagnosed with thrombosis with thrombocytopenia syndrome (TTS), which is a rare event involving serious blood clots with a low blood platelet count.

Overall, there have been 87 confirmed (53) or probable (34) cases of TTS so far in Australia, out of more than 6.1 million administered doses, reports newsGP.

“TTS is triggered by the immune system’s response to the AstraZeneca vaccine and is different from other clotting conditions,” the TGA site explains.

Although both John Hunter hospital and the TGA declined to comment on Alyssa’s case – the TGA did provide the following statement:

“Medical experts at the TGA review adverse event reports as a matter of priority and provide weekly reports on established adverse events,” the spokesperson said.

The COVID-19 vaccine weekly safety report released by the TGA on June 3, a week after Alyssa’s incident, states:

“Since last week’s report, a further four reports of blood clots and low blood platelets have been assessed as confirmed TTS likely to be linked to the AstraZeneca vaccine.”

One of those four cases was: “a 40-year-old woman from Victoria who is being treated in NSW”.

There are currently 38 men and 45 women diagnosed with TTS in Australia – with nearly half of those women receiving treatment in intensive care. Comparatively, only 10 per cent of men with TTS landed in ICU.

“We continue to receive reports of side effects to the AstraZeneca vaccine as it becomes more widely available in Australia. The reports are generally consistent with what is being observed internationally,” the site says.

Back to Top
Close
X
Bandits acting with impunity under ‘sleepy Buhari’ – US economist, Hanke…In the NewsDaily Post Steve H Hanke, an American applied economist at John Hopkins University, Baltimore, United States, has taken a swipe at the President Muham…