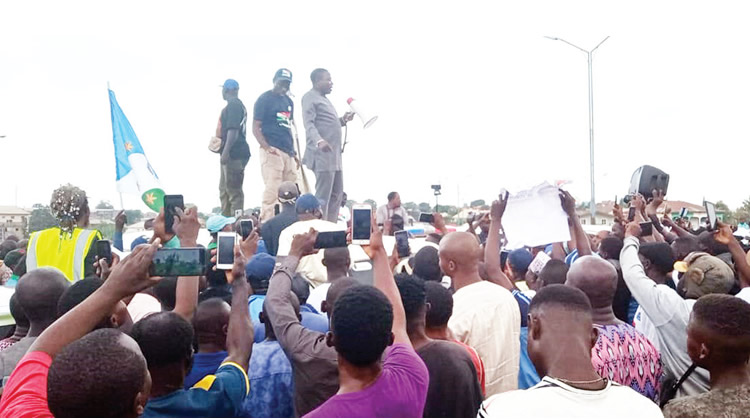 The monarch said Igboho was “forced” to leave the country, noting that the agitator was ready to continue the fight against killer herdsmen.

According to the monarch, there was a division among Igboho associates before he left the country.

While some said he should stay back to fight, others, especially his kinsmen, aligned with the thought that he should leave the country.

The respected monarch said Igboho did not leave the country immediately the Department of States Services raid his home as insinuated.

He said, “He didn’t want to leave for Benin Republic. He preferred to face the battle in Nigeria but we felt the manner DSS raided his house and killed people was dangerous for him. We actually forced him to flee because of his safety. They went as if they were directed to either kill him or bring him alive.”

When asked if asking Igboho to flee would not affect the self-determination agitation, he said, “Yes, we want Yoruba Nation, but not at the expense of anyone’s life. There would not have even been an agitation if the government lived up to their responsibilities.”

On the choice of Benin Republic, he said, “We have Yoruba-speaking people there. We have monarchs who still have ancestral traces to Nigeria. The Ooni and Alaafin still have a strong influence on some of their monarchs and we are of the belief that it was the best option. The monarchs gave him all the support he needed and we appreciate that.”

When asked how Igboho crossed Nigeria border to Benin Republic, he said, “Eledumare (God) did it.”

Igboho is currently facing charges on immigration offences in Benin Republic after he was arrested on Monday, alongside his wife, Ropo. However, his wife has been released.

Following the bloody raid on Igboho’s Sooka residence, the Department of State Services also arrested and detained 13 of Igboho’s associates, adding that during a “gun duel,” it had killed two of Igboho’s supporters later identified as Adogan and Alfa.

Others were three charm jackets/traditional body armour, two laptops, one Toshiba and one Compaq laptop, Igboho’s passport and those of his aides.