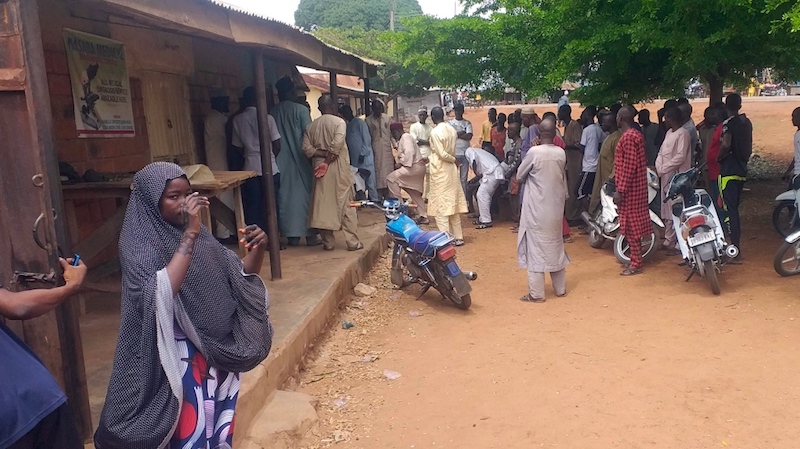 By Laleye Dipo in Minna

No fewer than 116 of the 136 pupils of Salihu Tanko Islamiyya School in Tegina, Rafi Local Government Area of Niger State, abducted by terrorists on May 30 are 56 days old in the dungeons of their kidnappers today, with hope for freedom still distant.

Tears continue to flow in many homes in Tegina, as traumatised parents await a miracle for the release of their kids, following the refusal of the abductors to free the pupils after collecting N50 million ransom contributed by sympathisers.

Seventeen of the initial 136 abductees escaped, while three others died in the forest where they are being held.

The kidnappers had agreed to free the remaining 116 pupils if the ransom reduced from the initial N200 million to N50 million was paid.

Last Monday, sympathisers mobilised N30 million to the kidnappers at an agreed location in the forest, after an initial N20 million was paid in June. But after counting the money, the abductors declared that it was N4.6 million short, and detained the conveyor of the ransom. The pupils were also not released.

It was the second time the kidnappers will declare ransom incomplete. In the initial N20 million paid in June, the abductors said it was N2 million short after counting it.

The kidnappers subsequently phoned the parents last Monday to send the N4.6 million balance, plus another N2 million short from the initial payment of N20 million, totaling N6.6 million.

Besides, the kidnappers are also making fresh demand. They want the parents to supply six brand new Bajaj motorcycles before the pupils would be released.

“We are fed up, we are leaving everything to God” one of the parents told THISDAY yesterday.

When contacted, the Head Teacher of the school, Mallam Abubakar Alhassan confirmed the story saying: “We don’t know what to do next”.

Alhassan said: “All the parents are now Koboless. We have sold everything we have to raise the ransoms collected by the bandits, yet they refuse to release our children.”

Three of the abducted pupils have died in the dungeons of the kidnappers, and many of the remaining pupils are said to be seriously ill, resulting from hunger, cold and trauma.

The pupils, some of their teachers and passersby were abducted on May 30, but 17 of the abductees escaped from the clutches of the bandits three weeks after their abduction.

Three pupils also died in captivity few days back. It was gathered that the bandits gave the sad information to some of the parents in a telephone conversation, but they (bandits) did not disclose the names of the deceased pupils.

The Chief Imam of Tegina also said he made similar announcement after one of the regular Muslim prayers in the town early this week.

According to THISDAY findings, the bandits told the parents contacted that they would send the video of the burial of the late pupils and that of the present condition of the others to confirm their state of health. As at press time, the bandits had not sent the video.

Some parents told THISDAY that the Niger State Government promised to help offset part of the ransom but failed to deliver.

However, Secretary to the Niger State Government, Alhaji Ibrahim Ahmed Matane, debunked the claim saying, “There was never a time that government promised to pay ransom to bandits or assist the parents to pay any or part of the ransom. We have a policy not to pay ransom. We still stand by that policy.

“You know this issue of payment of ransom is not healthy. Government, as a policy, does not do it but I know that because they are engaging with the bandits, they can tell them anything.”

The pupils, all from Muslim homes, spent the Eid-el-Kabir festival in the den of their abductors.

The mother of one of the pupils, whose name was not given, died early last month as a result of trauma. The remains of the deceased were interred in Tegina according to Islamic injunction.

Some of the kidnapped pupils are between ages four, and 13. The headmaster of the school, whose two children and a sister are among the abducted, said some of the victims were too young for the ordeals they were facing.

He also indicted both the federal and state governments for abandoning the school and the parents of the students in their moment of despair.

Alhassan, popularly called Mallam by his community, in an emotion-laden interview on June 5, claimed there had been no sympathy from the government, and wondered why the federal government failed to provide the ransom demanded by the bandits.

He said it was a lie that the government had sent vehicles and motorcycles into the bush for rescue operation, and denied the report that he had prior information of the attack.

The head teacher disclosed that the abduction had already led to the death of two parents of the victims, warning that more casualties may happen unless the students regained their freedom quickly.

Fighting back tears, Alhassan said on June 5: “I have witnessed the funeral prayer of one of the parents here, very close to the school. She died because she had just one child who is our student. She was not around when the incident happened. When she came back, they told her and within 30 minutes, she collapsed and died. That was the day before yesterday.

“A day after the incident happened, another parent died. She had two children. One was sent to the town while the one with her was kidnapped. She died of heart attack.

“As I’m talking to you now, my wife is down. She was put on drip, she didn’t cook; she didn’t eat. My little child at home, who slept with me on my bed, woke up only to begin to shout the name of his elder sister, asking me “Baba, when is she coming back?

“One painful thing was that my sister called me before the last discussion with the bandits, crying. She swore that the children are sick, they cannot walk. She told me they have removed their hijabs. They have unveiled them. They removed their shirts and they are left with only trousers.

“There is no food. They gave them kulikuli (groundnut cake). How do you expect them to survive? They took them to unknown environments. I heard people saying they kept them on the floor. When you are talking about floors you are not talking about classrooms or a house. No, they are kept in the bush. They are sleeping on the ground, no leaves, not mat. How do you expect them to live like that?”

Another parent, a mother, Mrs. Hashimu, in an interview, few days after the abduction said: “The whole incident was terrifying because everything happened in my presence. I was hearing everything. I saw when the bandits were going away with these children but there was nothing I could do. Government is not helping matters at all saying this, saying that, yet we cannot see anything on the ground.”

This news originally appeared in This Day.

Back to Top
Close
X
Emir of Daura to Buhari: Things would have been difficult for Nigerians without you…In the NewsBy Rejoice IIiyaAlhaji Umar Faruk Umar, the Emir of Daura, has said Nigeria is lucky to have President Muhammadu Buhari “at this point in time”.Speaki…