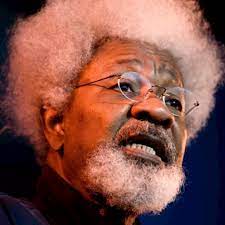 Nobel laureate, Wole Soyinka, has again said that there is no hope of Nigeria continuing together as one nation if the Federal Government fails to do the needful.

According to the foremost playwright, Nigeria cannot continue as one country unless it is decentralised as a matter of urgency.

“If Nigeria fails to decentralise and I mean, decentralise as fast as possible, manifestly not rhetoric, then Nigeria cannot stay together.

“It doesn’t work with anybody any longer. Because the nation is on a suicide slide and the people feel that they do not deserve that kind of suicidal plunge and they have the right to say ‘sorry o, I’m getting out of this plane before it nose-dives.”

Nigeria needs an urgent solution to this “knocking” problem.

Back to Top
Close
X
Unemployment rate under Buhari worst in Nigeria’s history: World Bank…Latest NewsPeoples Gazette Anew World Bank report has indicated that the unemployment rate in Nigeria has risen more than ever in the history of the country unde…

X
What makes New Zealand specialLatest NewsNigeria Abroad For everything you know about New Zealand, chances are that you still have more to learn about this Oceanian country—because there’s a …