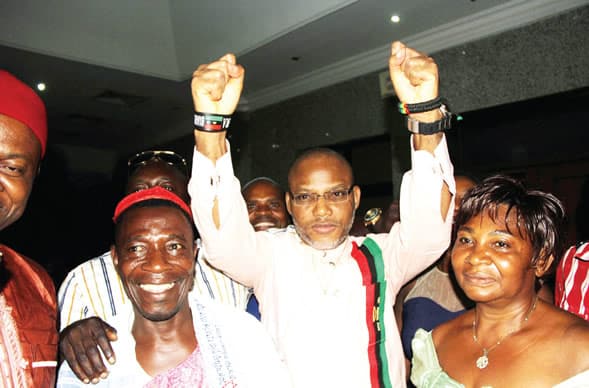 The Department of State Security Services (DSS) has approved a few media houses o cover the trial of the arrested leader of the Indigenous People of Biafra (IPOB), Nnamdi Kanu.

Naija News reports that the trial of the IPOB leader continues today, June 26, at the Abuja High Court. Kanu is facing an 11-count charge of treason, treasonable felony, terrorism and illegal possession of firearms, among others.

Recall that the Biafra leader was reportedly rearrested in Kenya and extradited back to Nigeria on the 27th of June, 2021.

The secessionist was then arraigned before Justice Binta Nyako who ordered his remand in the custody of the DSS until his next trial date which is July 26 and 27.

In a move to control the crowd at the Abuja High court, the secret police on Sunday barred unapproved individuals from coming to the court.

The DSS also barred The Guardian, Vanguard, The PUNCH, Daily Trust, Tribune, Daily Sun, The Cable, Naija News and Daily Times, among others from covering the trial.

A document shows that the 10 journalists accredited for the coverage of the trial, was signed by Catherine Oby Christopher, Chief Information Officer, Federal High Court of Nigeria, and dated July 23, 2021.